In this time of digital images and on line presence we are exposed to a lot of beautiful beadwork. At times a particular piece seems to stand out and then another and over time you begin to notice a theme of one artists work. This is what happened for me with Heather Collin.

I began to see some intricate shapes, which had a feeling of substantialness. The colors were interesting and the shapes were intriguing. As is often the case with me, I filed it somewhere in the back of my mind until the next piece caught my attention and again it belonged to Heather.

Curious as to who this bead weaver was I began exploring her Facebook photo book albums and her website and Etsy stores. Heather, who lives in South Africa, (it still boggles my mind how we can have a relationship across continents, connected by beads) creates patterns for her beadwork which she sells on line. Heather shared one of her patterns with me and I can attest to the well written and cleanly illustrated nature of her patterns.

I started corresponding with Heather and found her to be very gracious. My curiosity was piqued when she described her CRAW (cubic right angle weave) tutorial. With the recent popularity in CRAW I wanted to know how she did it and she graciously shared her knowledge with me. I've since done some CRAW exploration and oddly I do it differently then I've seen it described. I never really thought about it, when I wanted that, what I refer to as double walled RAW look, I sorted out how to go about it never looking to see how others were doing it. That will be a post for another day.

Heather tells me she started beading in 2007. She has certainly built an impressive body of work in that time. She is happy to be able to make a living at what has become her passion. She recently has added zentangle to her creative undertakings and is interested to see how she may bring it into her beadwork. 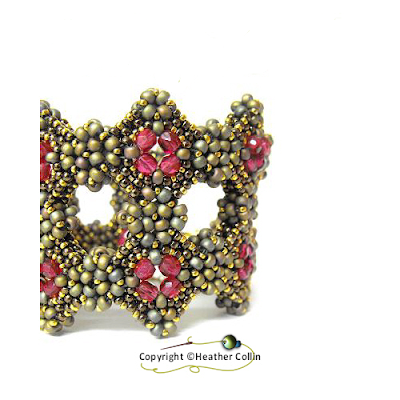 This fanciful ring I found on her blog 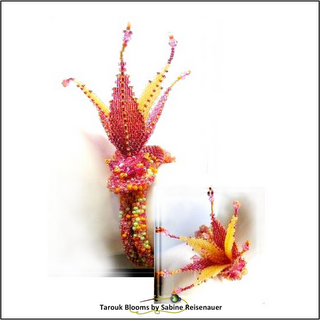 Hindia, her most recent pattern seems to have gone viral 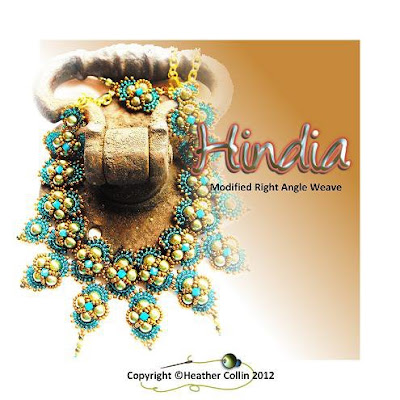 I am particularly fond of cactus drops. 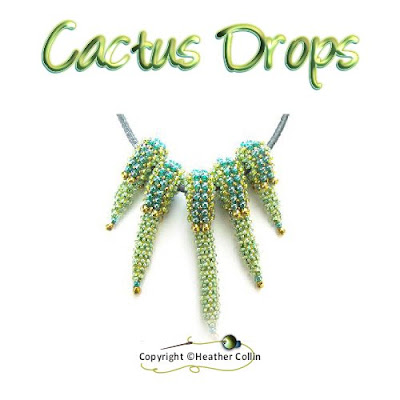 And now I need to go explore a few ideas I have for CRAW!

Posted by Marcia DeCoster at 8:14 AM

Thank you so much for introducing me to your readers Marcia, I said it before and say it again, I am truly honored that you did this for me :)

I am one of those people for whom RAW has been a struggle. When I saw Nancy Dales' post on her CRAW necklace, (along with Heather's video) I was convinced that I would not be able to master it either. However, Heather's clear explanations were a joy, and I'm well pleased with my accomplishment of the technique. She is truly a blessing to the beadweaving community.

I too have been following Heather for some time now. Her work is absolutely amazing. As for her CRAW video tutorial, I agree with Shirley...there is none better.

I love the work of Heather Collin and I've bought some of her tutorials.
They are really fun to make and I can recommend them to other beaders!!

Heather is brilliant - thank you for sharing her work!

Marcia I completely agree with you about Heather...she is awesome! How very cool of you to write this review for your readers...I love that about you, always sharing the beady love!

I learned RAW from you when I found Beaded Opulence...that book was the reason that I decided to even try RAW again. You completely inspired me to see the amazing versatility of the stitch...and I fell in love with it!

And then a few months ago, I found Heather's video tutorial for Cubic RAW and I "got it" instantly (after having been so confused by the written directions I had seen in some magazines)

Ever since then I have become a fan of Heather's work and began collecting some of her tutorials! She is very talented and her tutorials are excellent...the directions and diagrams are very clear and easy to follow.

I am currently working on her Boleyn Cuff, definitely one of my favorites so far!

So thanks for sharing the love and blogging about such a talented bead artist!

Well thank you Tia, I think most of my readers have discovered Heather on their own, talent has a way of making itself known like that. Glad you are enjoying RAW and CRAW!