The evolution of MadDesigns beadwork

I had an opportunity to consider my own personal evolution when asked the question in an online forum.

My first forays into bead weaving were amulet purses and although I made several I neither still have them or any photos.  Such is the early beading life when I wasn't teaching and didn't have to record everything I did.

I don't even know if these are represented in order, but I do know the top one, a bubble blower was very very early in my teaching career as were most of these pieces.  This whimsical little piece had a diachroic cab on the top which was glued to the top of a glass bottle cap.  On the inside of the cap I used my rudimentary wire skills to make a spiral at the top of the wire and a loop at the bottom.  The spiral was glued to the inside of the cap and became the bubble blower.  If you didn't get the pivot point of the connection quite right it would have a tendency to tip forward.  I would have been a better engineer today, but it's a fun piece. 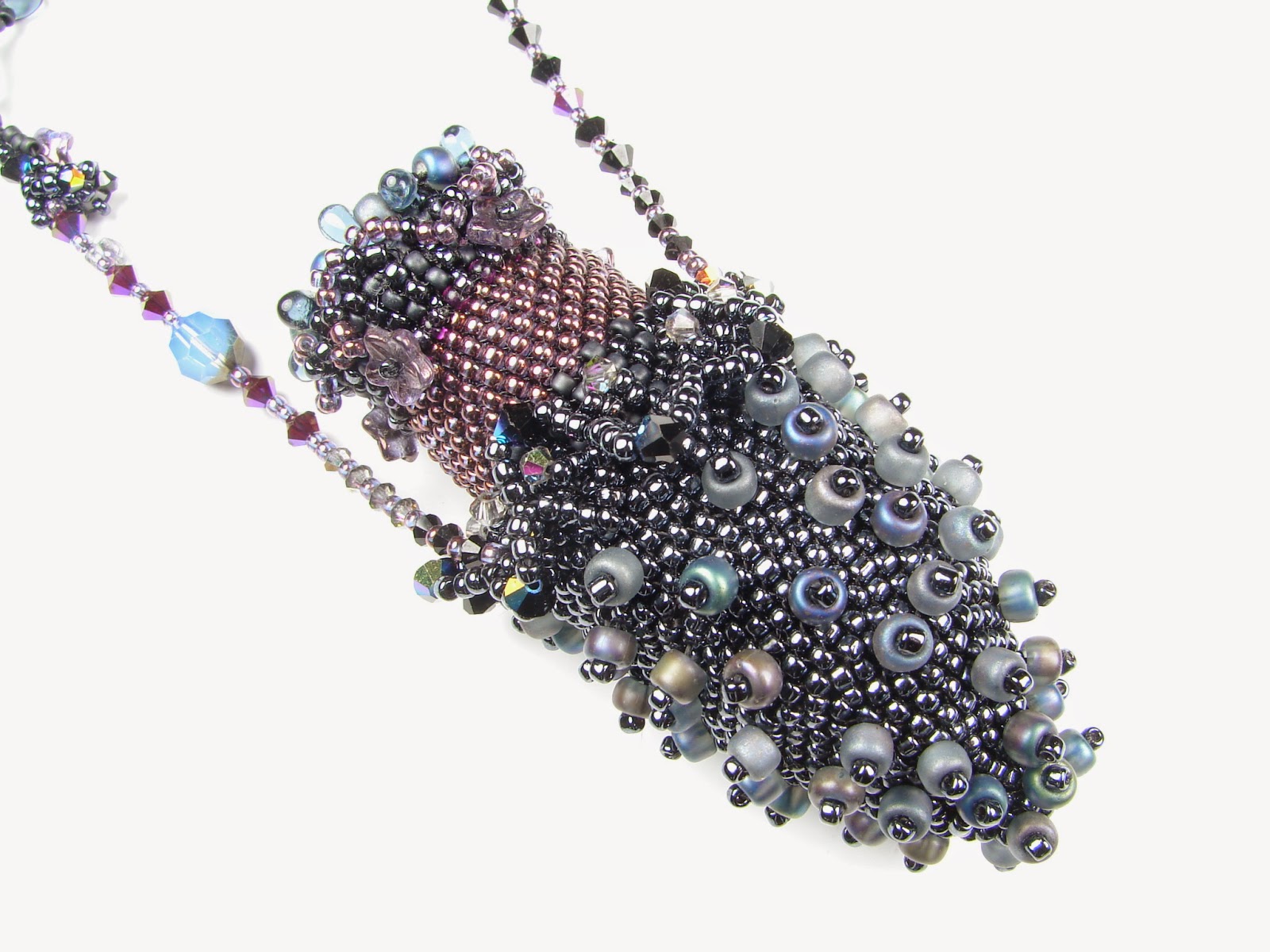 This Bellisimo bead was done probably in 2000 or so on an Italian sail boat cruise down the coast of Italy.  It was also my first published piece in the Art and Elegance of Beadweaving by Carol Wilcox Wells. 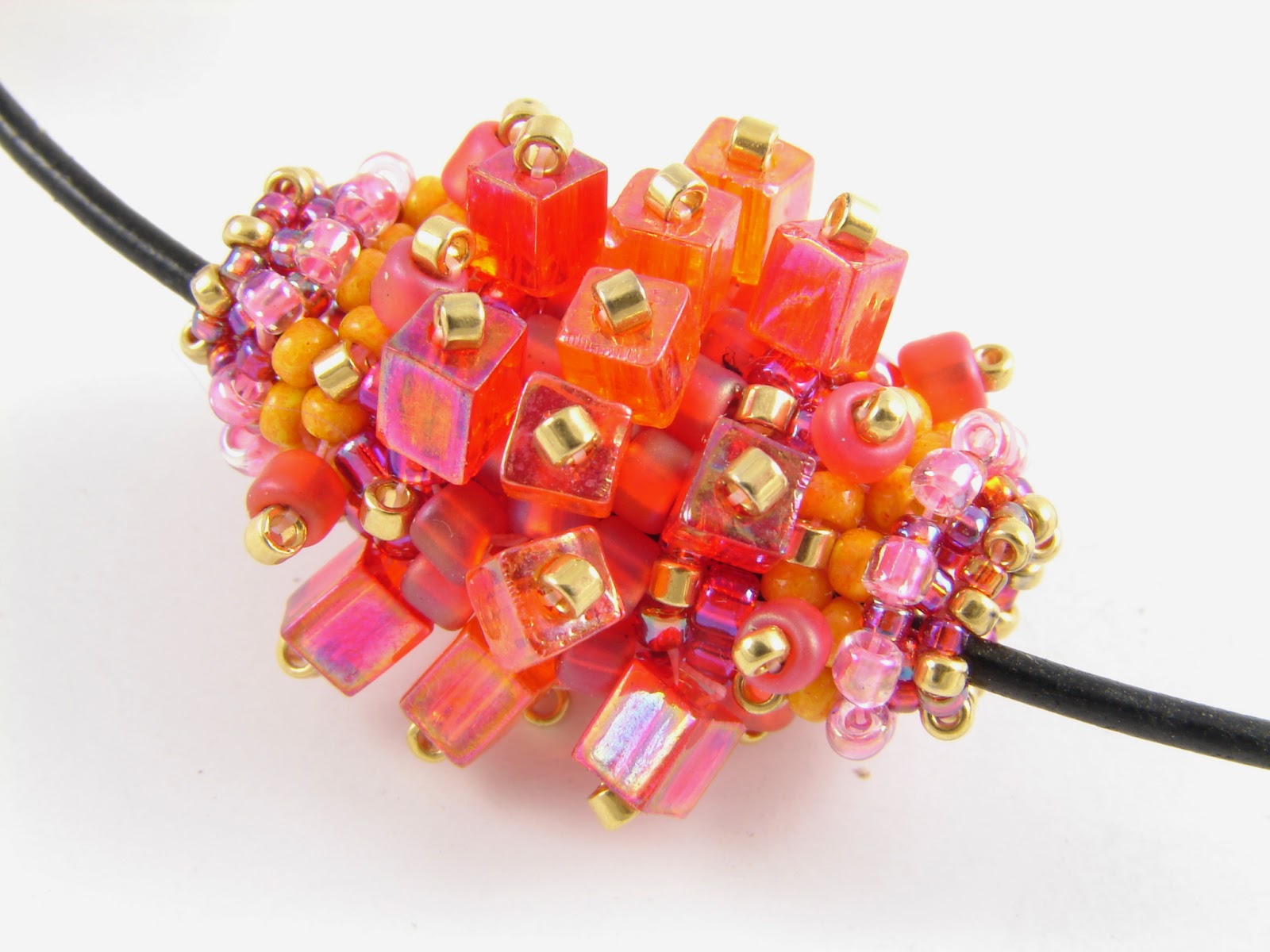 Here you can see my freeform stage.  I was fond of making tendrils and folds and creating  really soft and fluid pieces.  I wish my illustration skills had been up to par at the time and I sometimes think I'd like to revisit these directions and share my techniques for this soft, fluid freeform work. 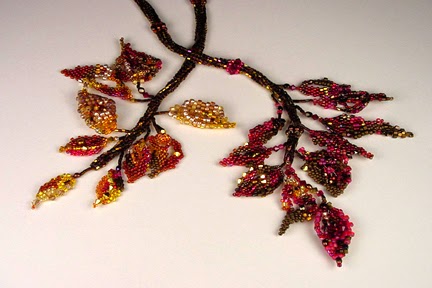 I especially love the colors and the dangles on this one.  It has a lot of movement when worn and I love that. 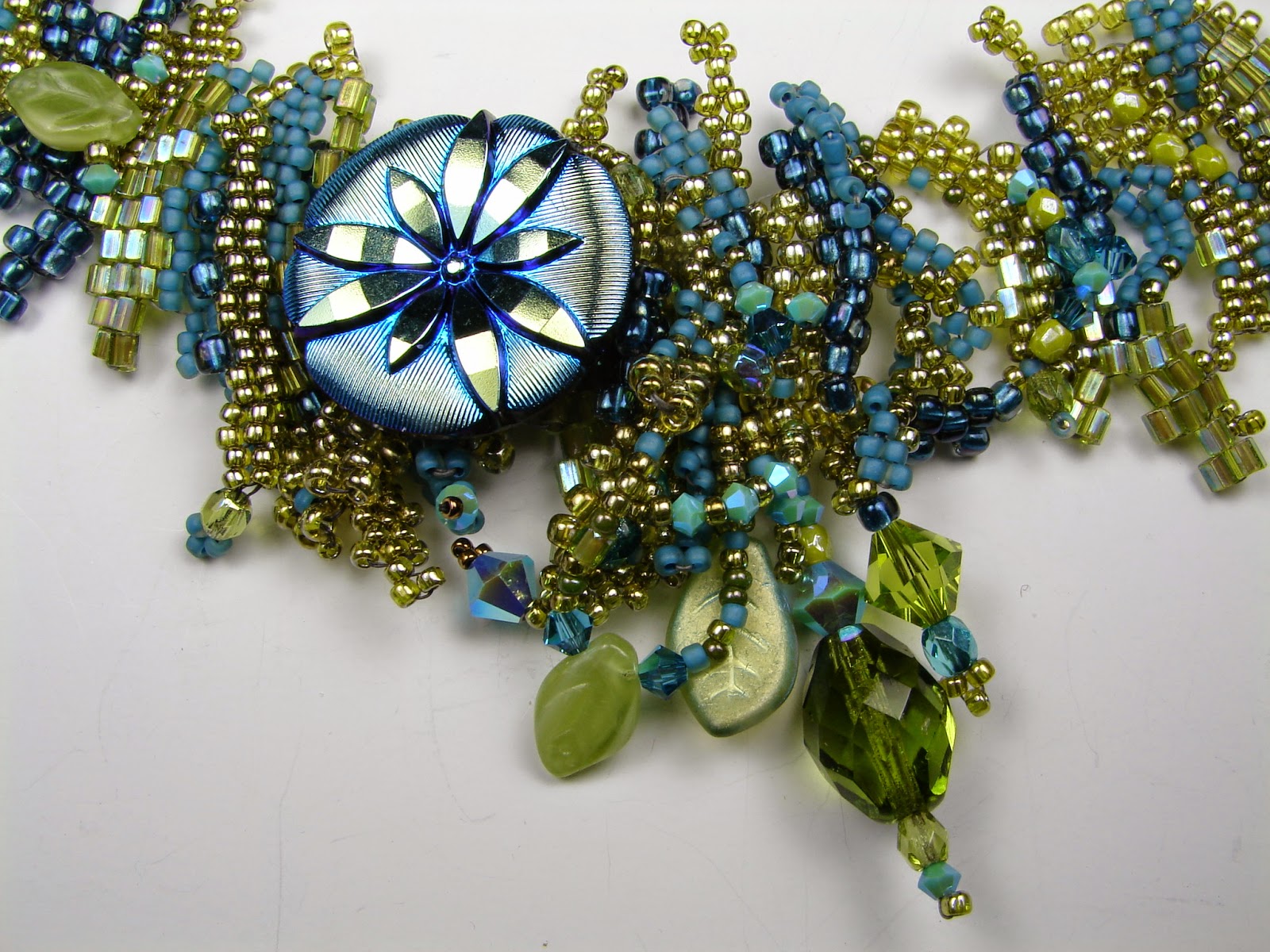 This piece belongs to daughter Casey and was designed to wear to a fancy opening of an eyebrow salon in Los Angeles.  She still has it and wears it! 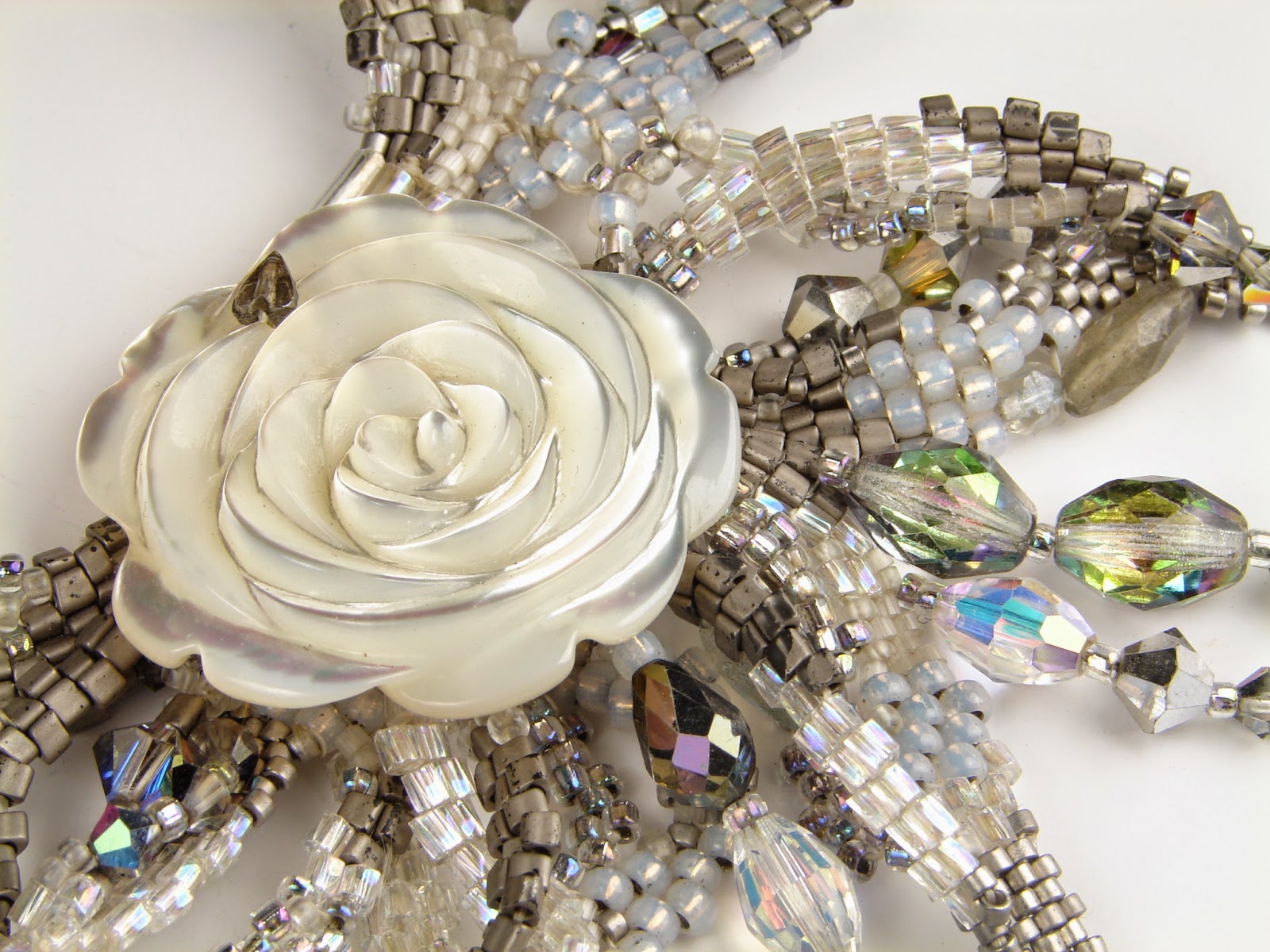 Here is one of the original rings of saturn which became a favorite piece of mine and was the impetus for writing Beads in Motion.  Each of the rings spins around the center core.  And proves once and for all that I do know how to do peyote stitch.  And you thought I only knew right angle weave. 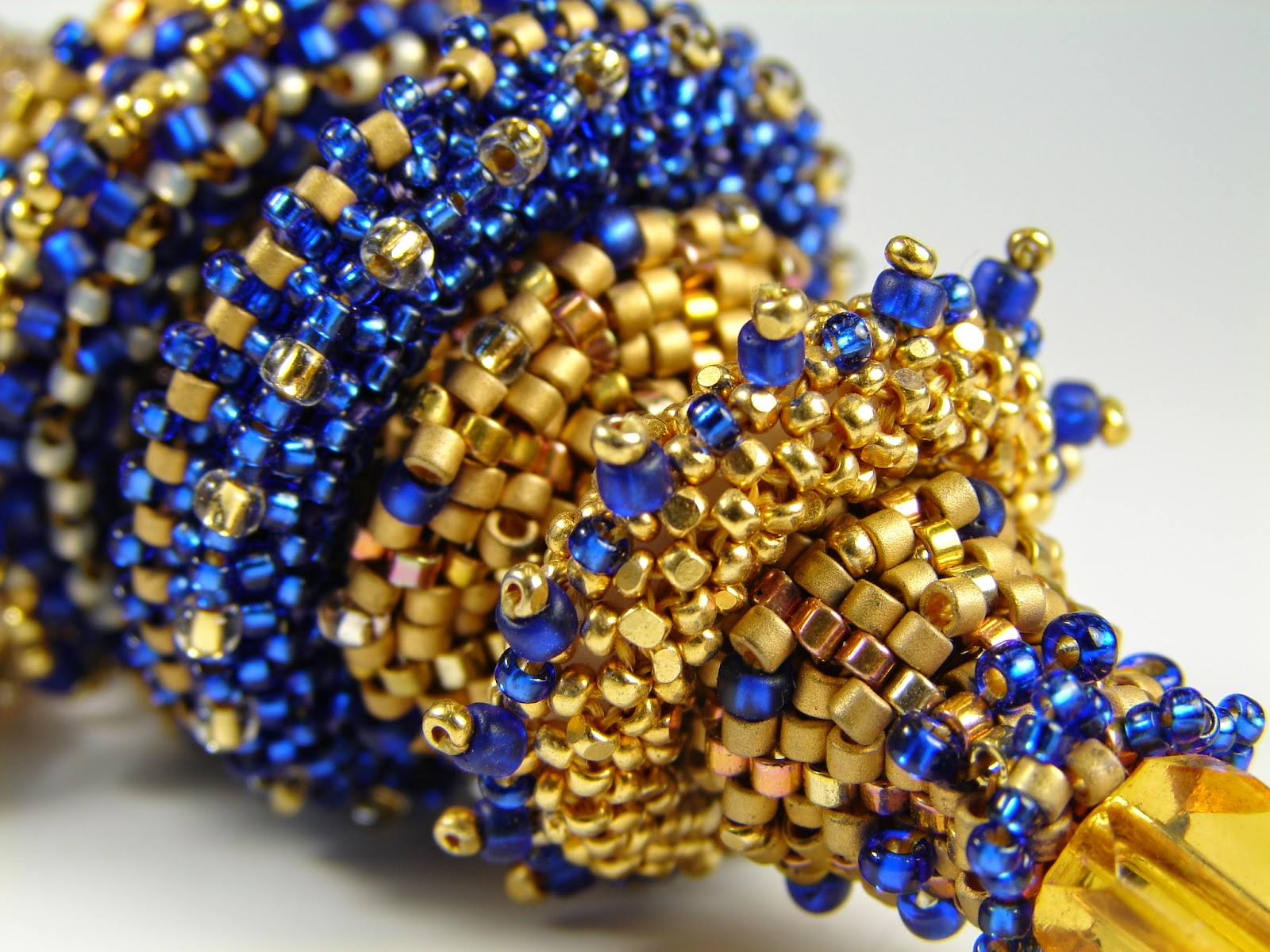 This piece amused me because I actually taught it and by todays standards it is pretty simple, but it was fun in it's day.  This you may recognize as the element from Romantica which I've used a lot in my design work.  It was first developed for Victoria to join the fans. 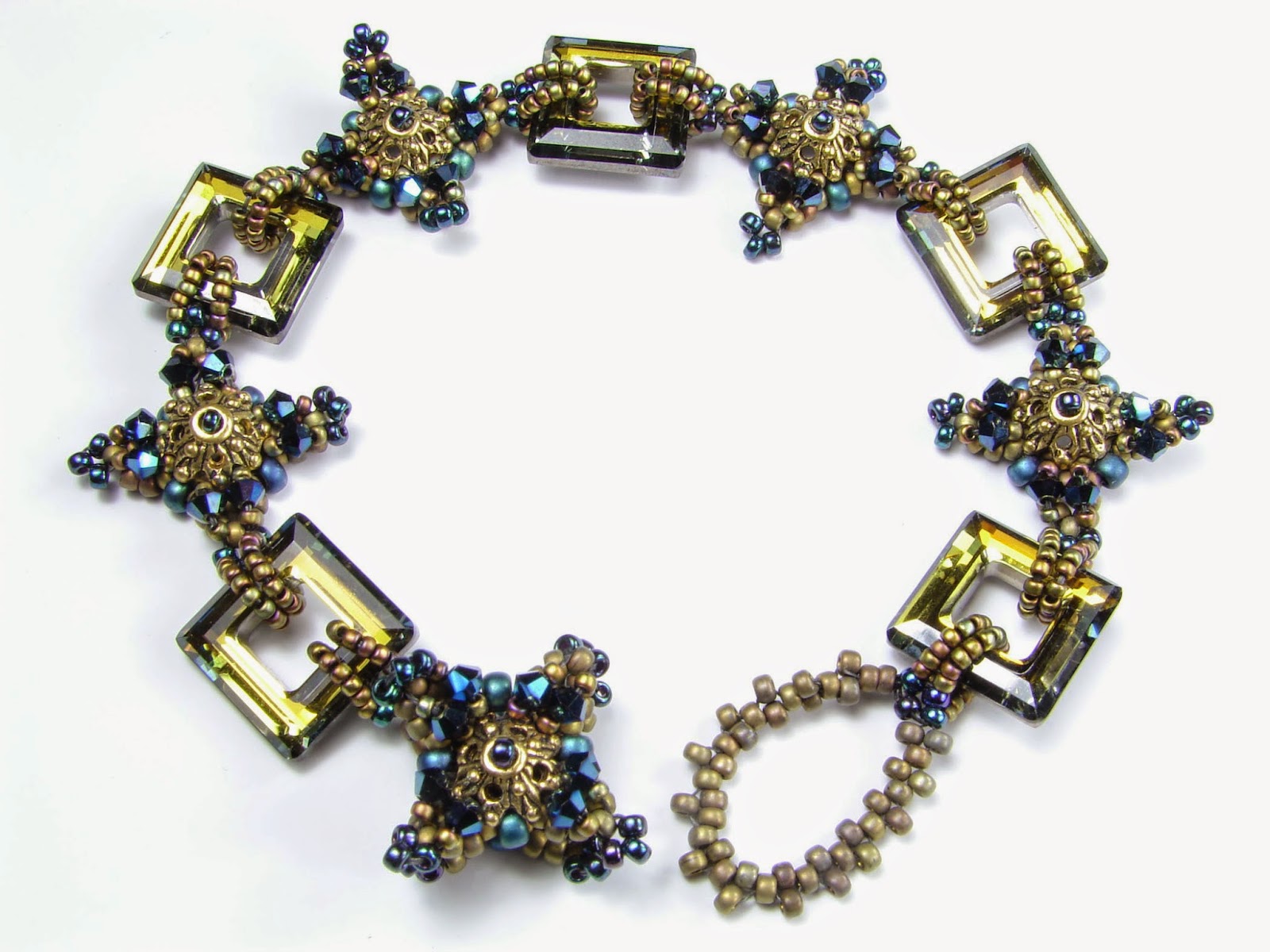 Victoria I know dates to 2003 because I remember designing it when I was sitting on a couch in my Haarlem apartment in the Netherlands.  I was trying to do ndbele with some picots sticking out from the rope, but it didn't work out so I embellished the resulting points and this little four pointed shape was born. 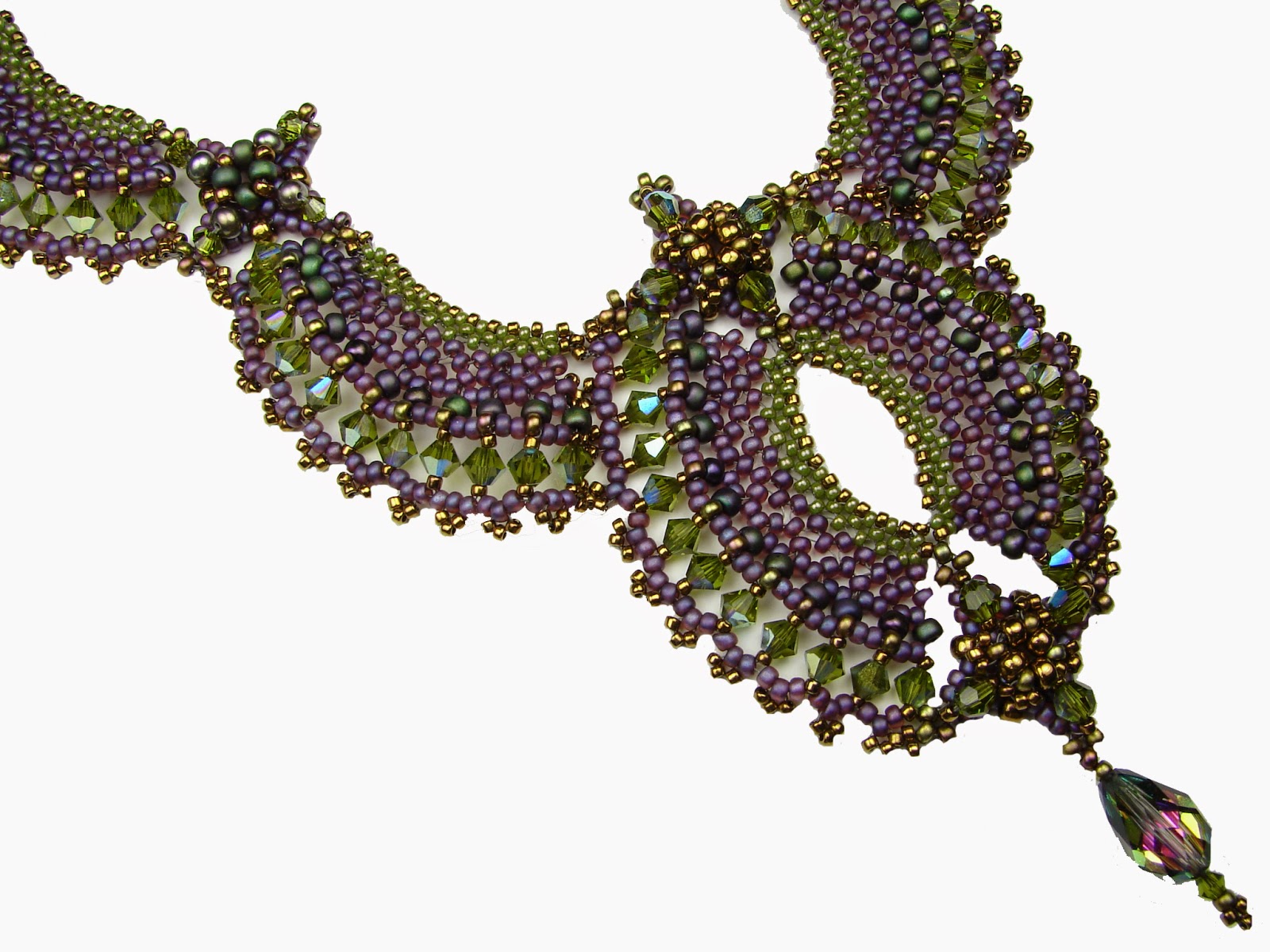 That's todays walk down memory lane!   Some of my designs have stood the test of time and some had short life spans.  If I had to pick one to repeat here, I wouldn't mind making a new, modern, fresh version of Victoria.  I can see it in dark silvers with indigo crystals, and someday I may do that!


Posted by Marcia DeCoster at 7:37 AM

I love your work. I have been a fan for several years now. I so enjoyed reading the history of each piece...could this have been just "Part One"...hint hint. Thanks so much for the inspiration you have given me over the years since I started beading.

Thank you Lisa, it is so lovely for you to take a moment to tell me that. Much appreciated!

I have admired your work for quite awhile. I think RAW is absolutely my favorite stitch, although I started with peyote. I have never tried the freeform peyote but, you make it look so fun and easy!

The Victoria and Urchin Lariat kits were the ones that got away for me. I LOVE seeing it again in the purple and green! So pretty!