I've mentioned that the Dream Keeper series are named for women in my life who I hold dear.  This one is named for Kandra, and she called yesterday to say she'd received it.  I wanted it to be sparkly and pretty but also with a bit of a warrior feels, so I used metal beads from Tierra Cast to close the top.  this one also has a companion, which is inverse in colors, but still closed with the metal beads.  No promises yet on when this one will be on the website....I need to focus on the next book at the moment, but it will be there, along with two other color ways, Lucia and Liz! 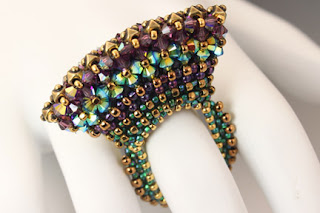 Kandra  has been a bead force in the bead community for a very long time.  I first met her when she attended a class at Creative Castle which was probably in the 2001 ish time frame.  She invited me to teach at the 'By the Bead Blue Sea' retreat in Cambria and at her store in San Luis Obispo.  It was back in my 'Bellisimo' days, a right angle weave beaded bead, and Kandra made several beautiful ones. 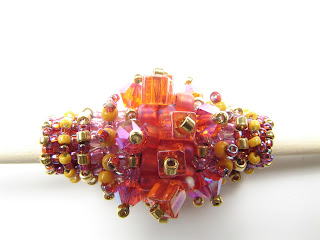 These are mine, but the dagger one was inspired by Kandra. 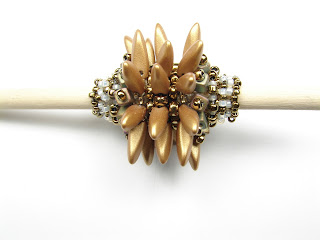 It's funny to go so far back and see the start of my right angle weave ways!  It would be fun to bring back Bellisimo....and maybe there is a day I will.

Kandra's current endeavor is Kandra's beads in Solvang, a Danish town off the 101.  We had the opportunity to stop by on our last trip North.  Kandra has a beautiful selection of Japanese seed beads, and she remains, kind, radiant and beautiful!


Posted by Marcia DeCoster at 8:30 AM