It doesn't get more picturesque than this.  Beautiful, charming vignettes everywhere I look.

The greens are so green, something you're not used to while living in a desert community. 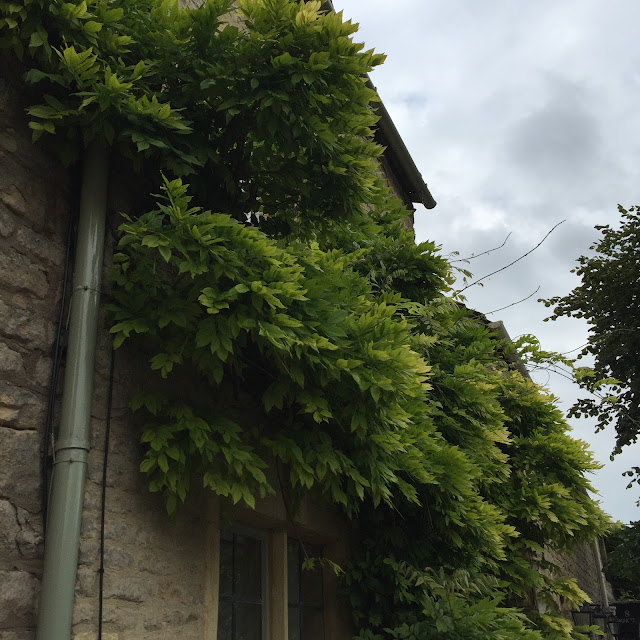 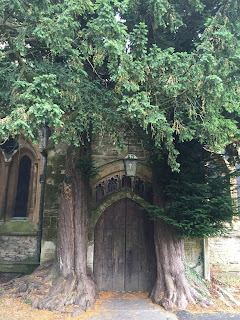 For my knitting friends, fleece alley, although I didn't see any reason along the walkway to have named it fleece alley.  Perhaps in older days there were sheep? 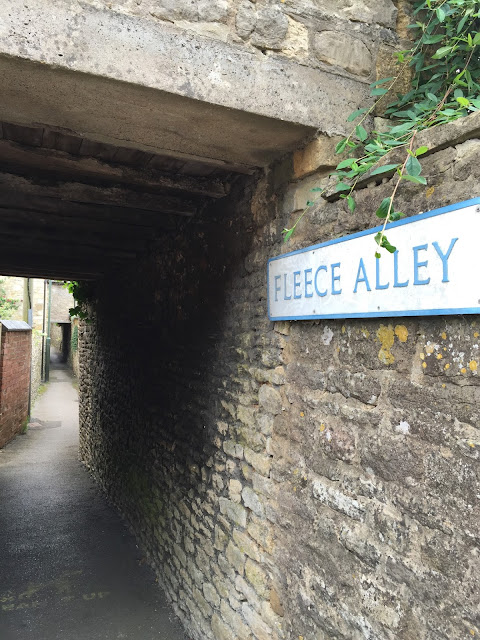 I love the old old buildings and the hanging baskets.  This was the scene everywhere we wandered yesterday.  What an excellent time we had. 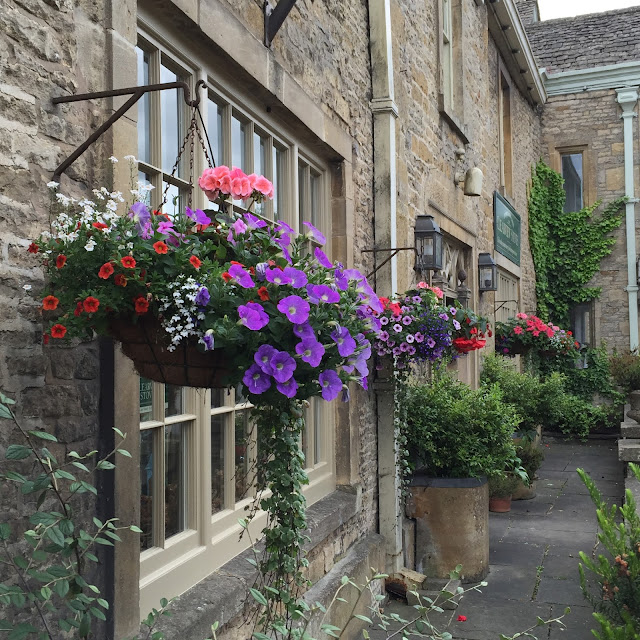 The old Stowe lodge, set back from the square on a tree lined path which invited you to walk down it. 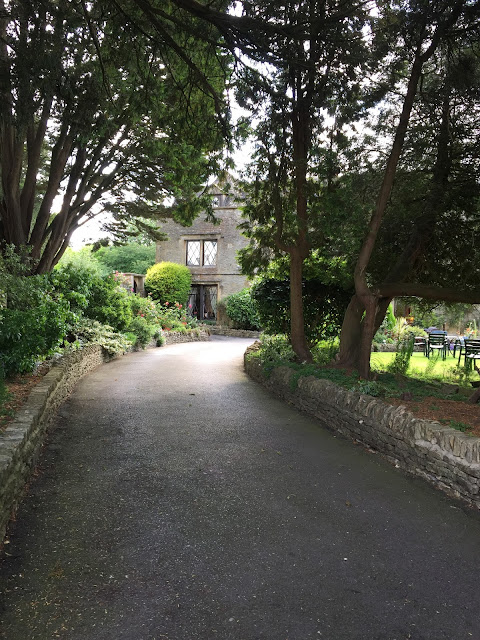 Last night we decided on staying in our cozy room so we set about collecting picnic foods from the various shops around town.  We had English Brie with salami and crackers and a pork pie.  Then a dessert of a ginger orange tart which was decadent and so wonderful I may need to have one more before leaving.

Today I teach Sprockets in a village hall nearby while a beader's husband offered to take Mark off on a day outing to a nearby museum.  Then back to our welcoming room and a choice of several really good dinner options.  Which shall we choose?
Posted by Marcia DeCoster at 12:40 AM 2 comments:

We moved from Yorkshire county to the Midlands last Tuesday in preparation for the three day master class I taught to a talented group in Barton Under Needwood.  It is a plan we conceived on my last visit 18 months ago so it was a long wait, but in the end worth it.  We had a grand time, well I had a grand time and reports were that the beaders did too. 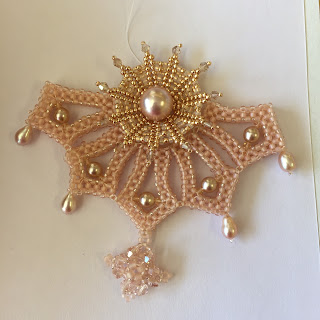 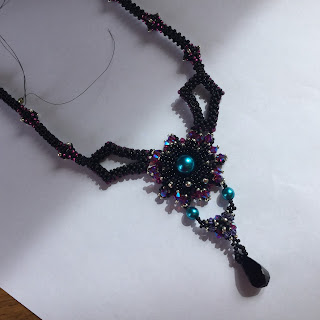 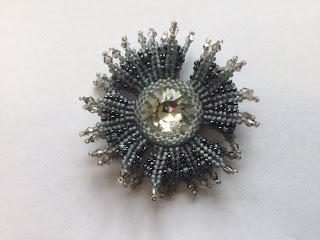 Three days of playing with the master class playground of components, finding arrangements and beading up new designs.  It was 'brilliant' as the saying goes here.  Here are just a few of the pieces that were in progress 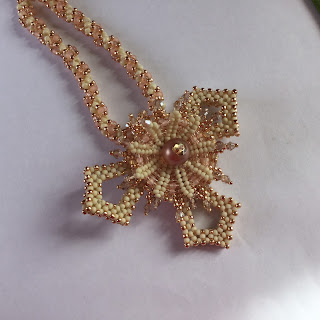 Before we got started though, Stephney and Tim, host and hostess extradonaire, took us on outings to Birmingham and then Bletchley Park.  In Birmingham we visited the museum for the special exhibit of Andy Warhol and William Morris.  The curator had drawn similarities between their beliefs and their artwork, although I would say, the connection seemed loose, I did appreciate the body of work from both artists.  Seeing the hand drawings of William Morris later turned into intricate design was wonderful.

Also in Birmingham Art Museum I enjoyed the Room of Dreams by artist Wendy Ramshaw. 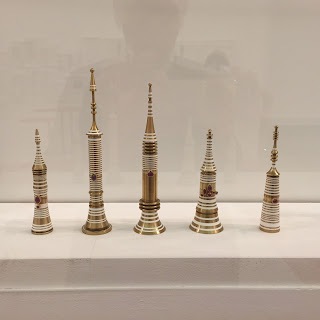 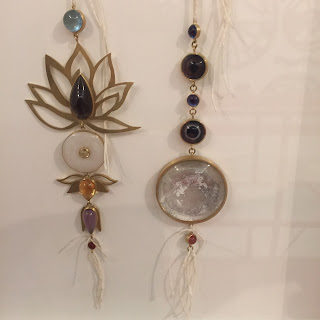 I also managed a wee bit of shopping and have a new pair of blue Doc Martin's which Tim fondly referred to as my Fairy Boots.

Bletchley Park was of course the real life setting for the movie the Imitation Game.  We saw a replica of the Bombe machine which was invented to decode the German Enigma coded messages.  The women who described it did an excellent job and you got a real understanding of the magnitude of the invention and it's importance in the war.  This piece of history was almost lost so thankfully there were people who cared enough to restore it and open it to the public.

Here is a wonderful flower from Tim's garden. 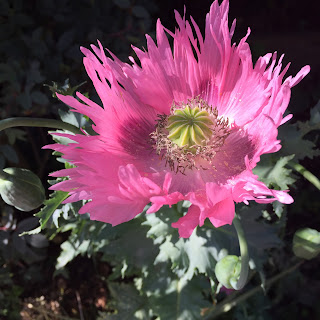 Monday's travels brought us to Worcester where we again staying with lovely hosts who are looking after our comfort.  The venue here is a large meeting room in a garden center.  There is a lovely cafe and a large garden store to peruse during lunch.  Yesterday class was Quattro Cupole and today we tackle Sprockets.

Posted by Marcia DeCoster at 11:03 PM No comments:

It's been a fabulous trip so far and it's only one venue of four.  We arrived Thursday morning through London and onto Leeds where hostess Jenny picked us up and delighted us with informative commentary on many of the sights and much of the history of Yorkshire County.

Our first stop was Robin Hoods Bay where Jenny lives and the workshop was to be held.  The views are beyond breathtaking and our accommodations looked onto the bay.  There was a village at both the top and bottom of a steep hill.   Down below directly on the bay was the old village which friend Audrey took us for a tour of.

Here's a great photo of the old village from the top of walking trail which were abundant. 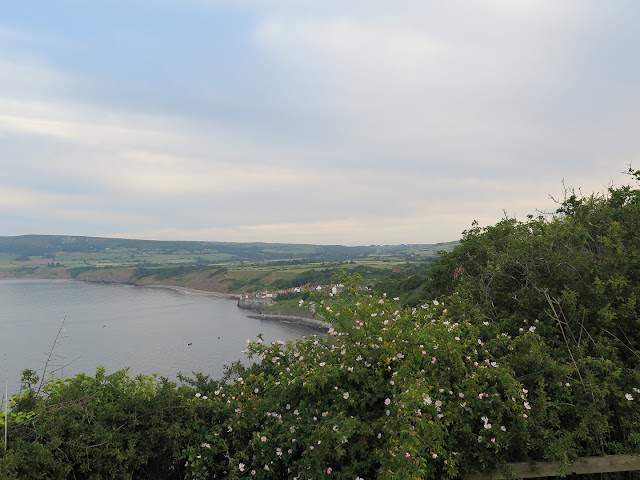 Our first evening stroll along the walkways led us to this sight. 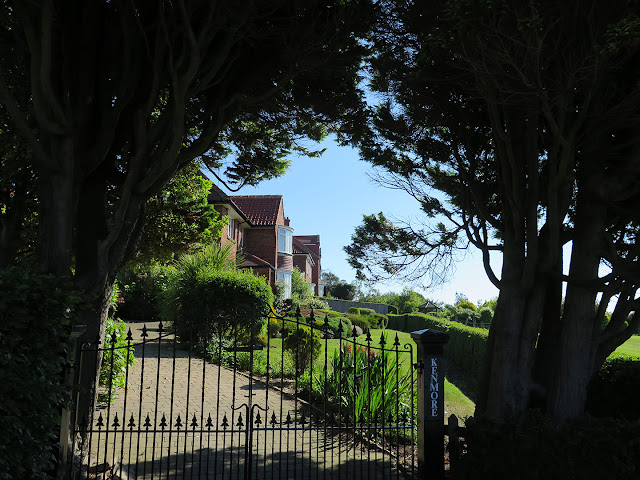 Friday's journey included Pickering where the steam train in the original Harry Potter was filmed.  We also had a visit to Whitby Abbey, a ride along the Moors where sheep were plentiful.  This photo is of you Susan! 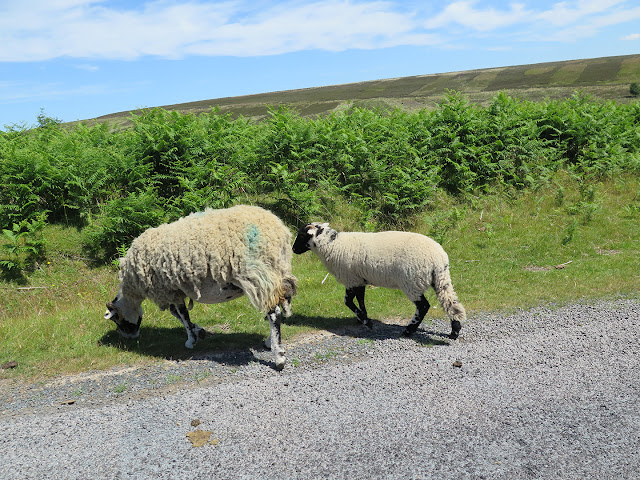 Saturday and Sunday the classroom was full of eager and accomplished gals who came to make A Touch of Whimsy followed by Romantica.  On the left we have Emma, Emma's Mom Cath, Dot, Avril, Janet, Harrie, Penny and down the right we have Jenny, Jayne, Jenny, Imelda, Vera, Alison and out of sight at the end Cher.  In the back corner was Margaret and Carolyn who've taken my classes before so it was nice to see their familiar faces.  Opposite them were Jacki and Sheeva (Who I must apologize to as I never saw the correct spelling)  I will tell you it was a very lovely two days where I mostly visited and gave out little bits of encouragement and a few ideas for variations.  The group happily got on with it an several approached finishing or finished their medallions and moved on with their diamond weave.  I thoroughly enjoyed myself. 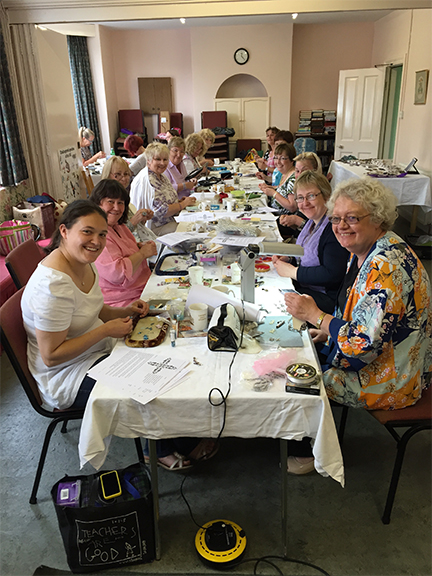 On Monday Jenny again chauffeured us to York, an old city center where we walked through the streets, dined, shopped and enjoyed all the architecture and history.

A view of Yorkminster, a beautiful old building w here we watch a bride and groom kiss on the doorstep. 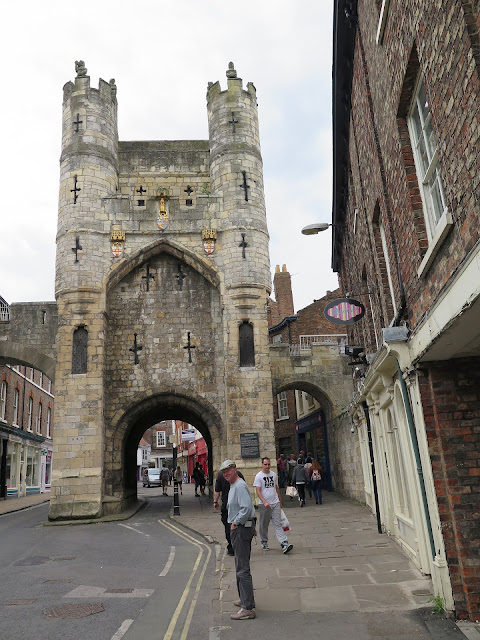 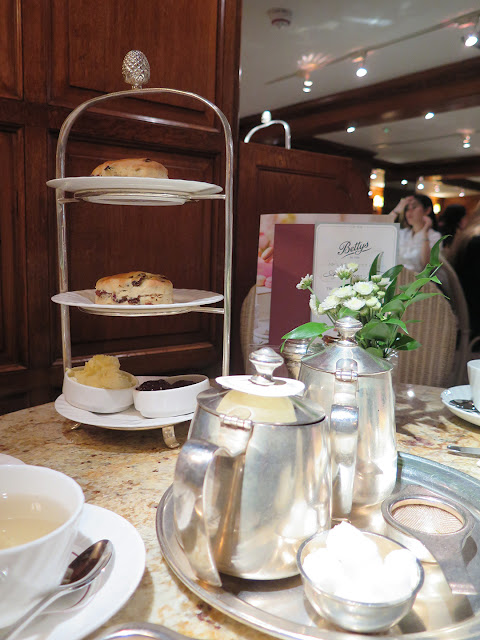 And a sign which has to make you laugh, I wish I could find some!  Apparently when this building is sold it is in the contract that they will maintain the sign. 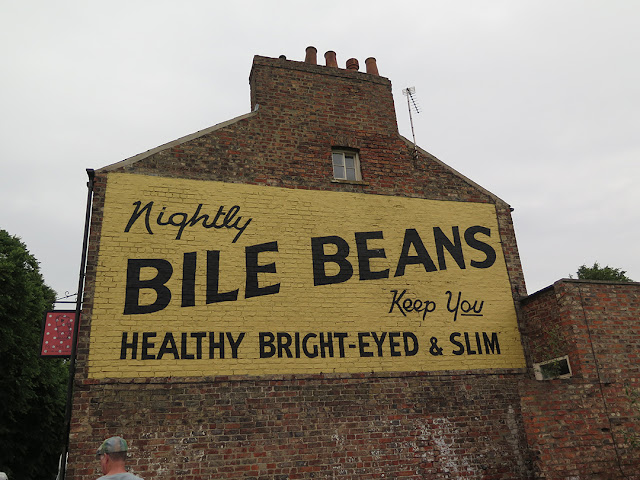 Finally I leave you with my Topman!   We celebrated our 28th wedding anniversary on Saturday with a bottle of champagne and a beautiful meal thanks to Jenny's warm hospitality.  It is such a pleasure to have him traveling with me. 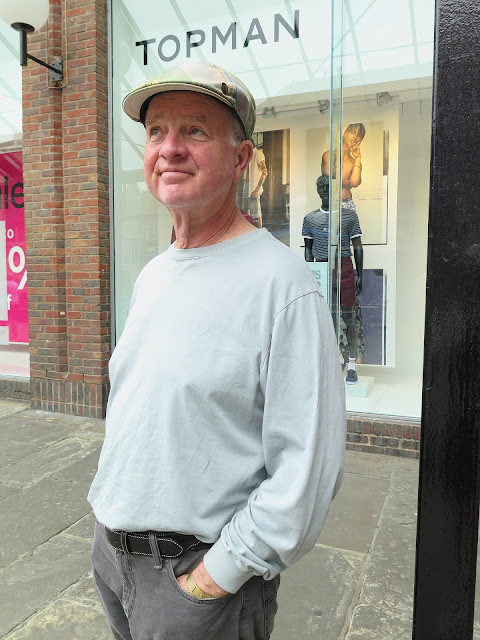 We've arrived in Barton Under Needwood where Stephney's husband Tim is whipping up one of his famous culinary delights.  Stephney will arrive home shortly and we have two days of fun followed by a three day workshop, also fun!
Posted by Marcia DeCoster at 9:27 AM No comments: