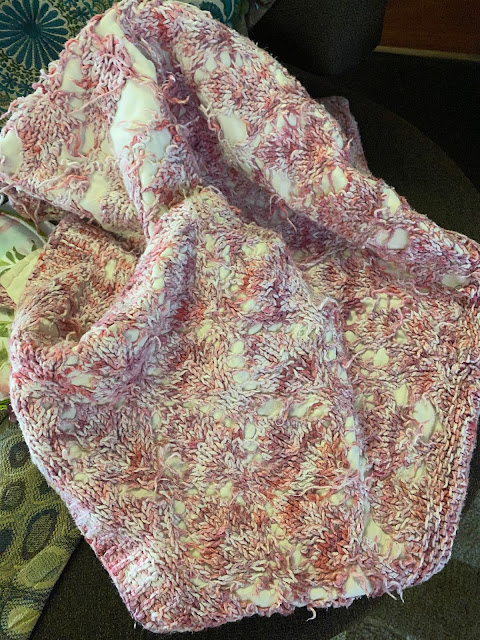 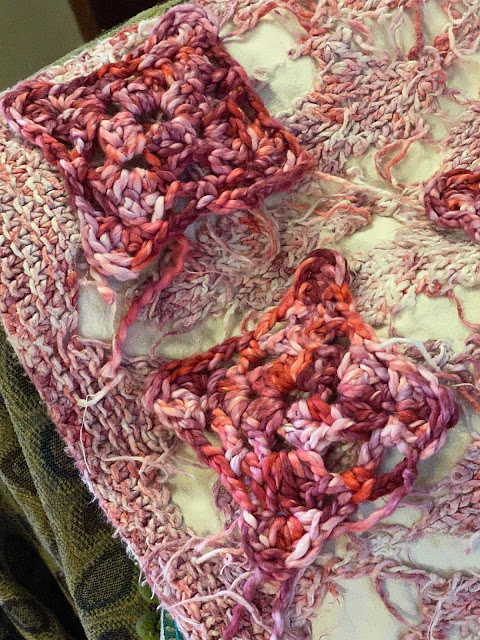 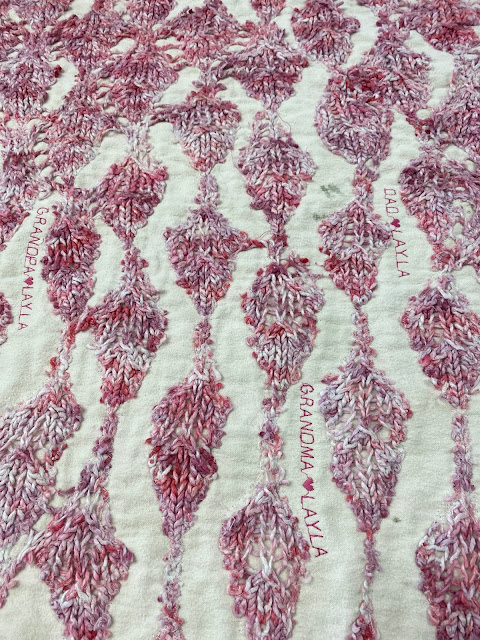 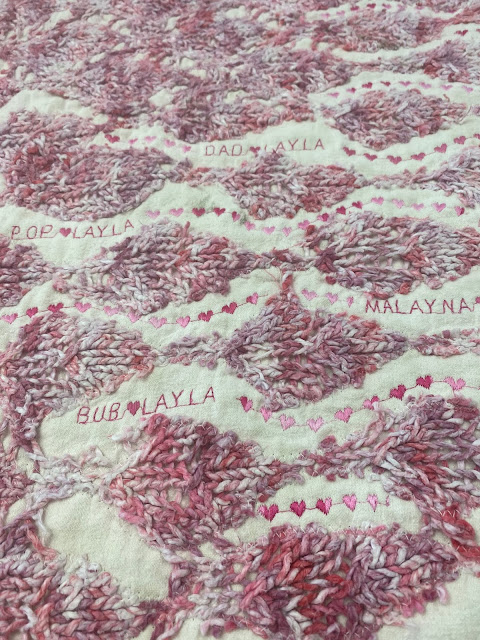 I am so grateful that being a maker is at my core.  I'm not sure what I would be doing during this time of staying home if I weren't able to create.

I had a couple of months where I got myself a tad overwhelmed with the frantic beginnings and learning curves, but I've settled in and am happily working my way through projects.

When I left you I had just finished ranunculus....almost.  But it turns out I didn't really like the twisted knit ribbing and I thought the entire sweater was too long.  So I ripped it back with an after thought lifeline, threw in some decreases and did an cord Bind-Off.  While I was at it I decided there must be a better way to join the two ends of an icord when working in the round and there is!  I used these directions.

Then I turned my attention to fabric project bags.  The dog print was a request from one of my daughters for a pouch to hold her drawing pencils.  I bought this fabric on an early March outing to Roxannes in Carpenteria.  Friends Carole of  Creative Castle and Heather Kingsley Heath who was teaching at the time accompanied me.  Little did I know what a last outing it would be!  I was glad to use the fabric. 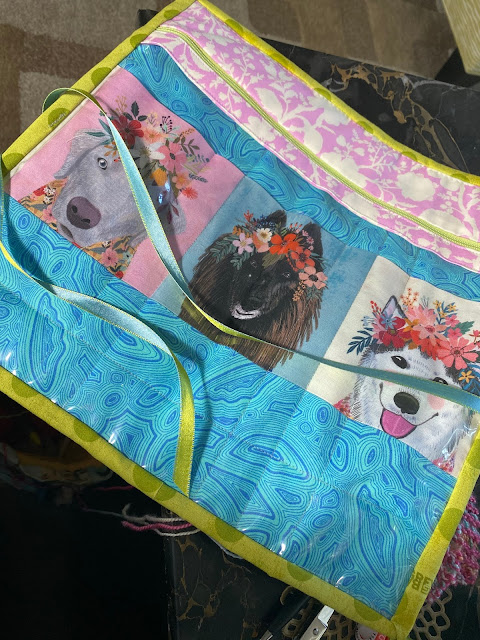 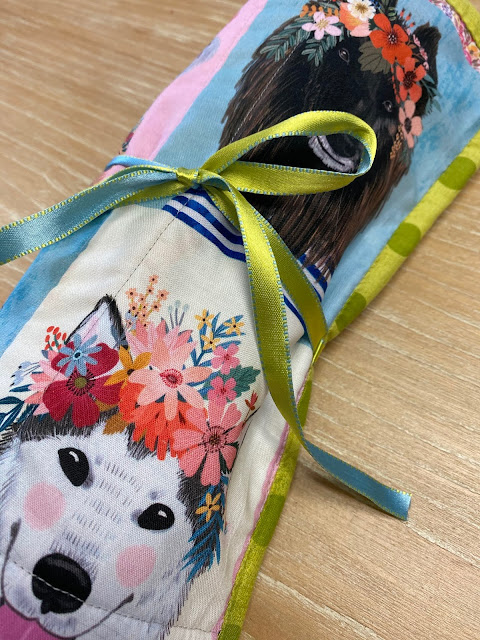 It turns out I like working with beautiful fabrics and small projects.  So I gathered up a collection of fabrics for my other daughters birthday request.  Two of the bags were from a tutorial by the Missouri quilt company on installing a zipper with zipper tabs.  They are beautiful and while the inside is lined they do have interior raw edges. Next time I'll learn to do the lining so that seams don't show, but I love the fabrics together.  The clamshell and small tote bag are patterns by Sew Sweetness. 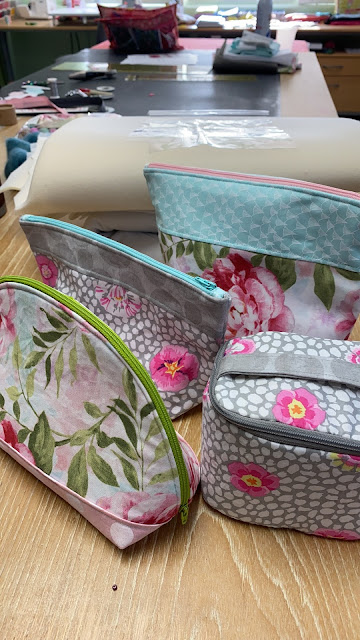 ]
This is called Kismet and it challenged me quite a bit but I perservered and I'm happy with it.  I'd like to make more of these for sure!  The pattern comes with three sizes of round and thee of the rectangle.  This is the smallest size at about 6 inches across.  You can buy just the pdf tutorial or you can purchase a video to go along with it.  In the end I purchased both since I"m new to bag making I wanted to see it done. 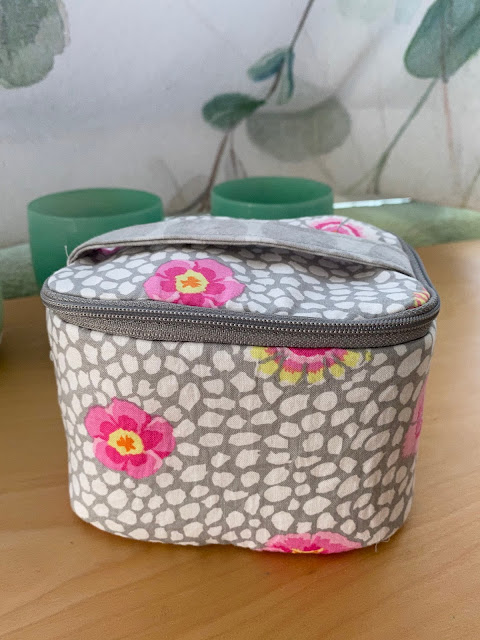 We went off for a short travel break in the airstream and this is my favorite airstream position and pastime.  This is Breathe and Hope by Casapinka with a yarn kit from Four Purls with Emily's yarn. 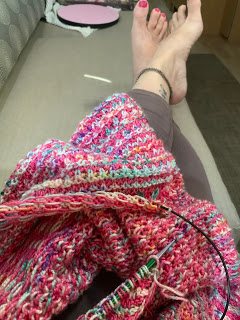 My airstream knitting time was well spent and I can now add Breathe and Hope to my finished shawls.  I'm wearing it over a Cumulus sweater in Malabrigio English  Rose held with a Lang Mohair.  It's one of my favorite sweaters to wear. 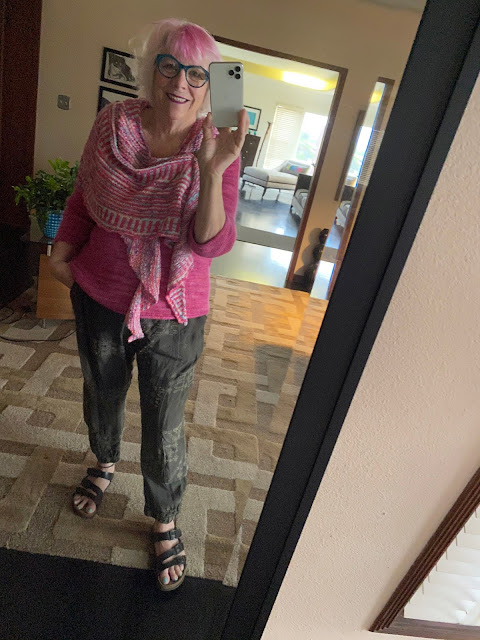 And now a bit of beading.  This is Solaris by my good friend Miriam Shimon (who by the way is launching her new website store soon, stay tuned.)  Miriam has never met a crystal or pearl she didn't know how to bezel and these tiny navettes are nestled together to make a beautiful pendant.  I'll show you next time! 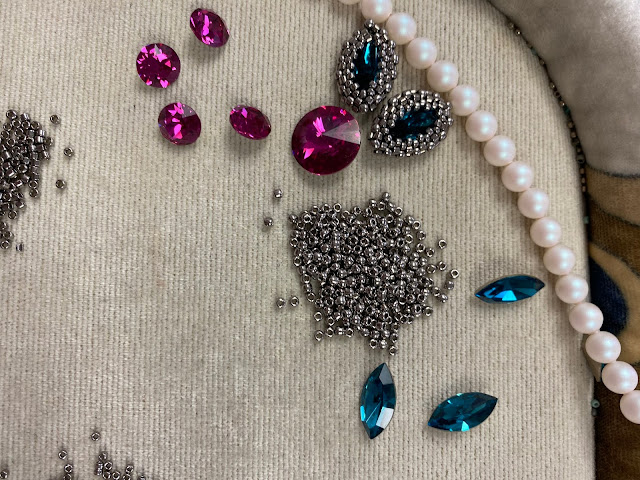 I'm busy getting ready to teach six classes for the virtual Beaders Dream retreat.   Virtual classes is a  whole new learning curve and I'm busy getting some video prepared so I can demo the fiddly bits close up and personal.   Two long weekends in October and then some time off.....lol, I've been 'off' since I came home from Tucson in February, the last time I taught.  But I did build 90  Amarissa kits and step up my zoom game with a microphone, lights, and a document camera. So plenty of learning to keep me busy.
Until next time, take care of yourself and each other.  I love you.