I have a new purple dress with a new missoni (ish) long swing coat that goes over it.  I wanted a long swingy necklace to compliment it and I wanted it in vintage pewter tones.

You know how I am always 'playing with possibilities'?  This indeed has a very romantica feel to it, but I changed it up first with the large swarovski elements disc, and then I used half tilas (brilliant) and Rizos and long megatamas in the medallions. 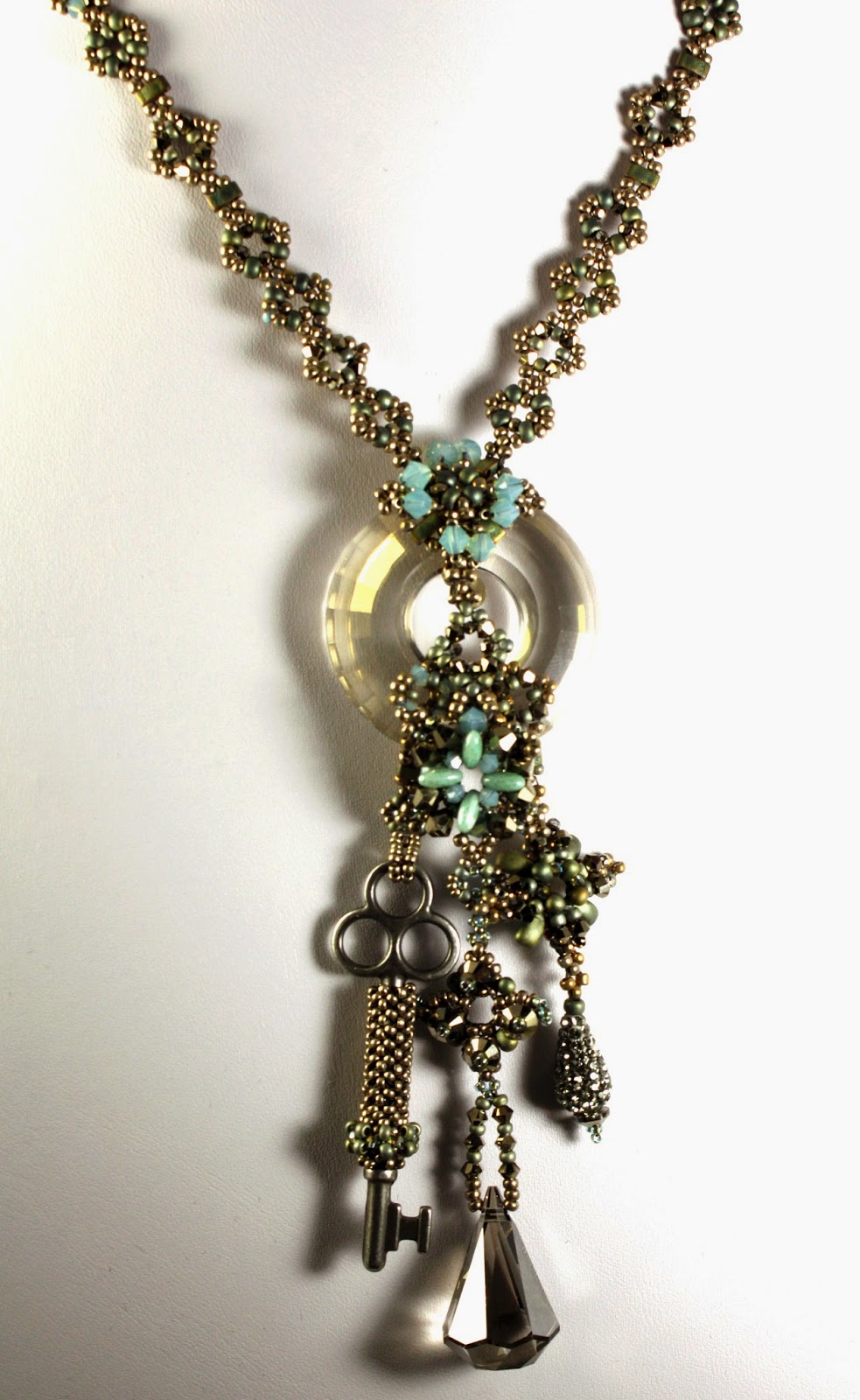 I love the look of old keys, although this one came on some pottery barn gift wrap.

The bottom drop is the new Swarovski Innovation raindrop pendant.  I love the shape and cut of this beautiful crystal.

I used different beads in each of the diamonds for the necklace and put some half tila breaks in to lacy it up a bit.

I also have a nifty clasp that will allow me to easily add an extender so I can wear this one short or long!

This one is for me!  Now for the matching earrings, and then back to the work of packing for our cruise!  We're off to the Bahamas for many days of beading fun!
Posted by Marcia DeCoster at 9:13 AM 7 comments:

This topic comes up almost as much as copyright infringement so I thought I would let you know where I stand on the subject.  This is me, I don't speak for how any other creator of stuff feels about it.

When I look deeply, artist may be too strong a term for me, I am a creator of stuff and have been since I knit my first scarf at 9 years old, maybe before when I made play dough beads or dressed barbie dolls with scraps of fabric.

It is at the core of who I am, it satisfies me like no other time spent.  I create because I have to.  Sometimes I am happy with what I create and since I discovered beads my love of creation and my love of adornment come together.

My creations are seldom planned, most often sitting down with a pile of beads and the very wispy sense of an idea.  Sometimes a piece of costume jewelry will influence a shape, or a color, sometimes a piece of glass or fine jewelry and sometimes just playing with the beads leads me to a new creation.

I know that at times I am subliminally influenced by something I've seen.  There is so much visual stimulation on the internet that  it would be almost impossible to not let influences creep in.  When I think of the growth in sophistication of beadwork these days, I think it is no accident that it coincides with the proliferation of images we are exposed to. If a similarity to my influence shows up in my work, it is as likely as not that I don't' even recall the original piece.  I of course never sit down to intentionally copy someone's design, so any work I do is original in that all of the influences I may have absorbed are changed up by my brain and my hands to create a new piece that is pleasing to me.

I hate the thought of being accused of not giving appropriate credit because someone somewhere sees a similarity to their work.  I am not saying this has happened to me, but I think it is at the root of this discussion every time I see it come up.

Although as I've said, I may have been subliminally influenced in my past,   I may also have just arrived at a similar design on my own.  If I were expected to give credit for that, I would find that unfortunate.

If my designs influence other creators of stuff to create stuff I am happy that they saw value and added to their own repertoire and growth.  That's good enough for me, I don't need public credit.  It is not why I create.

As always, there are exceptions and fine lines. I get that if you use a significant design element from someone else's work, it would be polite to mention it.  Again for me it's not required, but I don't want to speak for others.

Occasionally you come here and you get non beading content, this is one of those days.

Our daughter is expecting our third grandchild in the spring and so I have been doing what Grandma's do, I'm making baby clothes.

These are crocheted which is a throwback for me, I haven't crocheted in ages, but they were so darn cute.  The yarn is from knit picks and is the recommended yarn in the pattern.  It is soft and pretty, but it is kind of grabby, so it is hard to pull out if you go wrong.  I should have been smart and done test booties on a little more forgiving yarn.  As it is there are a couple of mistakes in the placement of the crocodiles, but I've decided I can live with that.  I also only did 3 rows of crocodile as 5 seemed like a lot on a baby.

The rib is formed by doing a half double crochet around the post, one in front and one in back which makes them look almost knit. 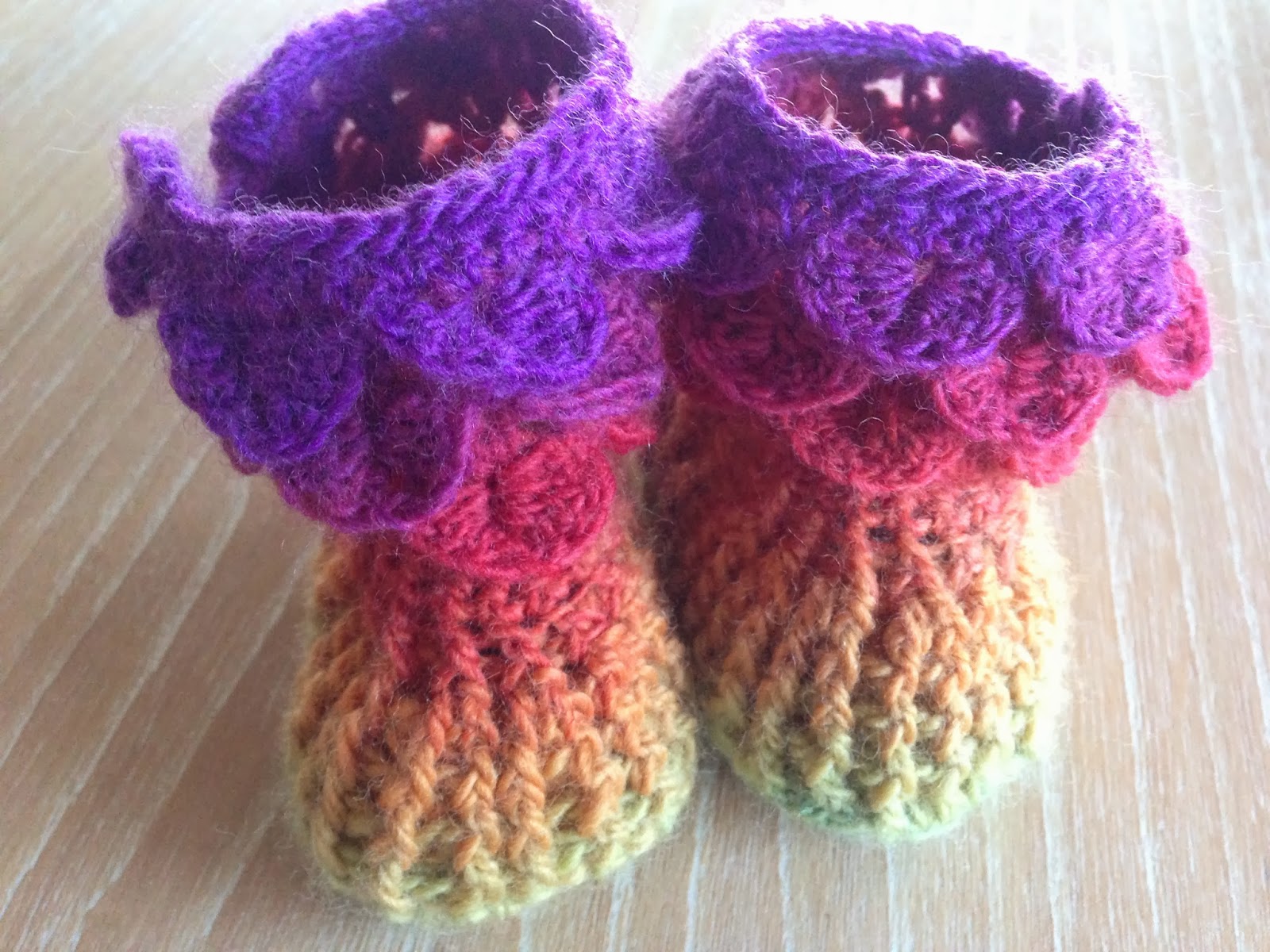 If you need to make a pair for someone in your life, they now come in toddler and adult size from Bonita patterns.