I've been a maker as long as I can remember, rolling play dough into elaborate little vignettes, learning to knit when I was ten, then crochet, a dabble in sewing, candle making, macrame, ceramics...

I think when you're a maker you are generally born that way, though I'm not sure of that, but I know I was.  I seldom have idle hands.

As my career of Bead designer/teacher winds down with only minimal engagements planned I have more time for making.

I thought it would be fun to use this space to begin to document those makes.  In a bit I shall change up the look and then start to photo my things as I make them.

Currently there is one sweater on the needles and a vest planned for Mark, followed by a second sweater for me. 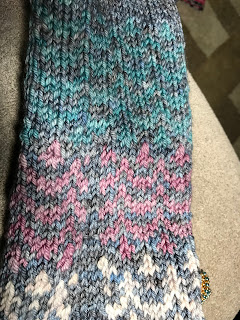 This is the sleeve fair isle that I am adding to the Amy Herzog enrobed sweater which is a wrap around.  One sleeve to go and then assembly.  I worked hard on gauge and measurements to end up with a sweater that fits, at least that's the plan!


I've begun a journey in sewing art to wear clothing starting with embellishing an existing jacket and sewing my first Tina Givens gypsy jacket.  That led to the knowledge that a serger would be a good tool and I am in love with what I can do with the serger.


Here is my embellished jacket.  The panels are cut from a fabric that I got at south park dry goods from Judi Patuti.  It's called Frieda.  I took a class with Marty Ornish which resulted in this up cycled jacket.  The original jacket was from Lee Andersen and I wore it often but it seems like a good place to start.  I added batting beneath the fabric panels and did some machine outlining and some beading on each of the panels.  Then I arranged them on the jacket and stitched them on. 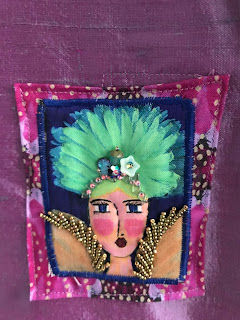 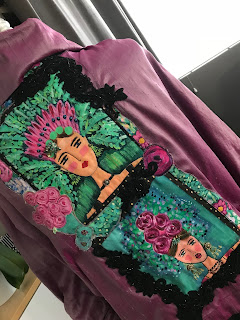 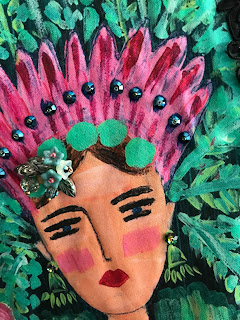 Then I cut my very first Tina Givens pattern called Gypsy.  I added some Ray Harris silk to the bottom and a tulle skirt, then added some lace to the bottom of each sleeve.  It's artistic enough but my lack of sewing knowledge shows a lot! 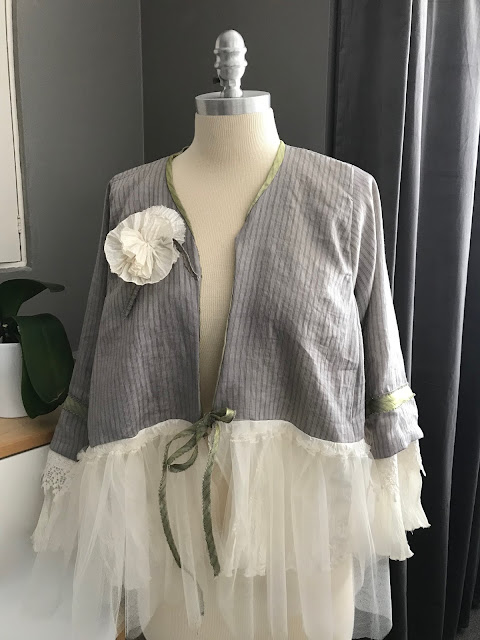 Determined to do a better job with my next project I took my time, watched some videos and used my new serger!  The result is much nicer but I didn't measure the sleeves and they turned out too tight.  I added a gusset and it's wearable and I love it, but next time I would adjust the pattern first.  There is a lot to learn to sew clothes that fit and look nice. This is Tina Givens Peplone coat.  I used the inverse of the fabric to make the pocket and cuffs. I'm sure there will be more failures along the way, but I am determined to learn.  This is a home dec fabric that I purchased from our local UFO upholstery supplier.  It was on sale and so I worried less about wasting a good fabric.  In the end I'm happy enough with it.  You can also see my new button pendant. 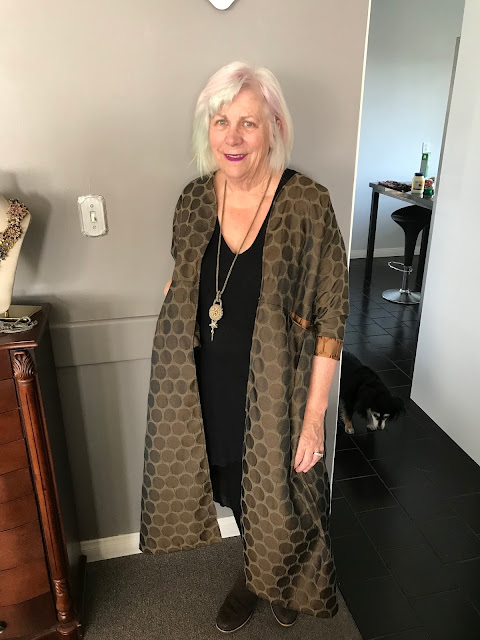 Now I'm busy with a ruffled cotton skirt for a grand daughter, photos in the next 'Makers' post.  Straight seams, a few ruffles and an all around easier sew!

I also went on an earring binge last week so as soon as I photo those, I'll share.