Sometimes beadwork calls for getting creative with a solution.  This is a cubic raw necklace I wove with gold beads.  The core of cubic raw lends itself to an armature and I wanted it to keep a round shape rather then drape where the front pendant was attached.

I used a black cable and pushed it through the center when the beadwork was completed, however no matter how many rows of cubic raw I completed it still had a tendency to slide down and leave 1/2' to an 1' of exposed cable on either side of the threaded clasp. 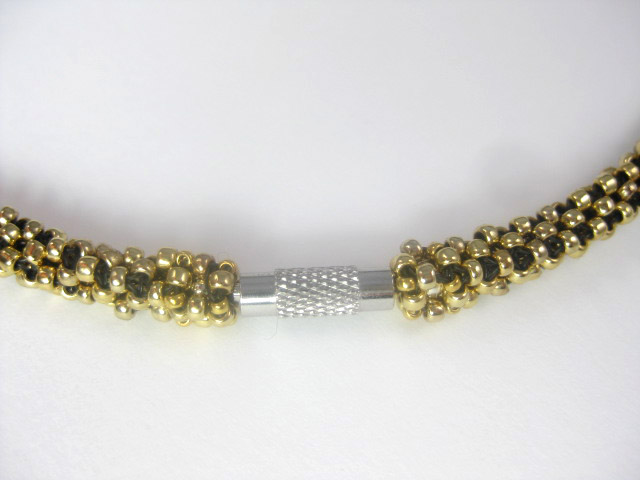 Aha.....a dot of super glue could keep it in place......um...not a good idea.  As careful as I was it spread into the clasp which then of course could no long turn, and the beadwork could not turn, it was kind of a mess.  One I wish I had seen coming.

I cut it apart and took the beadwork back down to where it was glue free, and rebeaded from there.  Solution this time?  I took a metal bead and forced it open wide enough to thread onto the cable by pushing it down onto an awl.  I then threaded it onto the cable and squeezed it tight with pliers.  Perhaps there is a crimp big enough to do this with, but I didn't have one, so the metal bead did the job. I did this on both sides of the clasp.  Then I beaded one additional row up over the stationery metal bead, and put a size 15 between each 11 and pulled tightly closed.  Now the bead work stays put and the cable does not show.
Posted by Marcia DeCoster at 10:30 AM

There are crimp beads made large enough to do this, however they would wind up flatter I think then what you're looking for here. I think your solution of opening the hole of the metal bead was perfect. Another option might be using a crimp bead cover which winds up looking like a round bead once it is closed.

Thank you so much for sharing your experience, Marcia, I was wondering how to solve this problem, too! And Beki´s comment made the solution even clearer, so thank you, both of you!