Or how much can I procrastinate?  We took Stephney to a meal at the Fish Market where she had a bowl of New England Clam chowder which reminded her of the chowders to be had on the West Coast of Ireland, but better.  Then it was off to the train station for a ride up to LAX where she'd be winging her way back to England.

And then it was supposed to be illustration time....but I thought that having been traveling for two weeks, I should perhaps just have a slow afternoon, with the huge push starting this morning, which it will any minute now, after I write this blog and shower and....I think my nails need polishing.


My slow afternoon consisted of a few pretty beads and some cubic raw and this shape emerged. 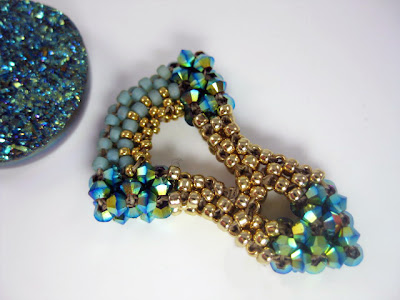 I don't know yet how it will work into a cohesive design but for the moment I am just loving the colors, the shape, the texture.  I want to coax it into it's final form, but that really must be for another day, or perhaps with good progress on the day,  it will be tonight's reward. It was originally a triangle until I pinched it together. The crystally bottom turned the corner of the triangle and worked well but with the pinched version I would probably only have one cube of crystals and not the three you see here. I don't know how after 20 years of beading I don't see these things coming, I think I should, but of course there wasn't a plan, just the needle, thread and beads which took me on this journey. When I turned the first corner, the bottom gold beads were going to be round forming a half circle and perhaps being the top from which a bail would hang. As I approached the mid point, I thought let's turn one more corner and the triangle emerged, and then with the triangle complete I pinched the center which rounded up the top and created this pleasing shape (but with too many crystals on the bottom, who knew, and me saying too many crystals is not a frequent occurrence!) I also think that it needs to be bigger if it is to coordinate with a bezeled drusy which is currently the rest of the plan. And so the design process goes, and now a shower and the beginning of the big book push.
Posted by Marcia DeCoster at 7:24 AM

Oh so pretty! Love the colors and shape, too. It looks like a great shape for a drop if you turn it so the curve is at the bottom. It reminds me of something..can't put my mind around it yet, but something that would swing back and forth. Thanks for letting us in on a little design session of yours. Sometimes our minds need the rest and most certainly our bodies need the pampering now and then!

Thanks Janet, this is almost always how it goes for me....a little beading, a little play with the piece, and new things show up. Yes, up or down it could do with a pendant suspended from it. I don't want to cover up the top because I love the line of gold that is showing.

It looks a little like a fish shape, so perhaps the chowder influenced development! I think it could be developed many ways depending on the direction it faces

I absolutely love the shape, reminds me so much of En Pointe and I can hardly wait to see what it becomes! Love, love, love it!