As I scroll through my photos in Iphoto, I'm coming across some forgotten images. While shooting video this weekend at Kate's one of the questions asked by the illustrious panel of bead summit attendees, was 'What inspires you?' It was a better version of the question but I just can't remember the exact wording.

I am often influenced by works in other artistic mediums, including glass and metal. Something about a shape will draw me in and make me ponder how I might create it using seed beads. Here is an example of the Gail Crosman Moore bead which led to the urchin bead. 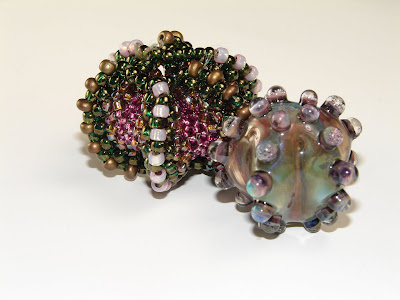 And went on from there... 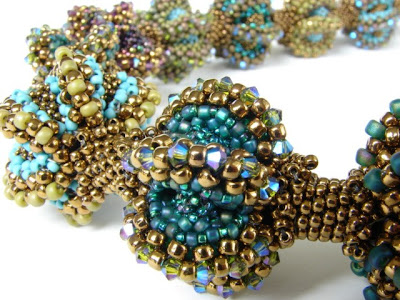 What I neglected to say at the time was that I often design through play. I encourage people to pick up their beadwork, to twist it and fold it and see what shows up. While making an urchin bead I decided to fold it the long way and see what would happen. What happened was this bangle. 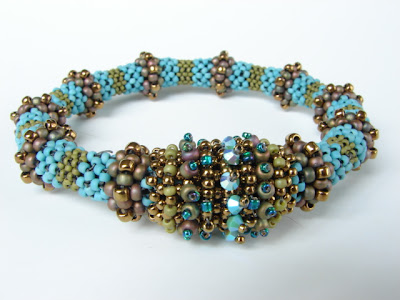 Each piece of design work is an opportunity to take it further or in another direction. Another urchin start resulted in Pharaoh's Daughter. 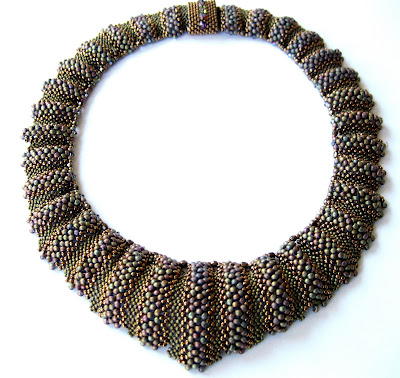 While working the first few rows I picked up the beadwork fabric and shaped it into a gentle curve. I decided to keep beading to see where that curve would lead. I increased the ribs as I approached the front and decreased them around the other side. I added a crystal between each of the beads on the top of the ribs to accentuate the curve and added a clasp.

I'm sure you can see some similarities, but the urchin bead, the bangle and Pharaoh's Daughter are all distinctly different pieces based on the same arrangement of beads.

So go play with your beads!
Posted by Marcia DeCoster at 8:18 AM

Wow.. thanks for sharing how your mind works and the inspiration behind a whole series. I learned something here!

Playing with my beads sounds great! I feel like making a ring.

This is really helpful! I don't tend to do that b/c I want to know what I'm making when I start out. I need to enjoy the mystery a little more. Thanks.

I just started to bead and my main problem is to find and recover my creativity and my spirit. With the few works I´ve done so far, I experienced that I indeed need to play and imagine in my head what I can do with this or that. So much creativity is lost in the daily grind that sometime is our life.