It all takes time

I would have loved to show you pictures of the new studio arrangement, but we are still mid way. Maybe more as we have a plan, which is really the hard part.

Previously I had a large curved table space which formed an L in the corner of the studio. It seemed like a good idea at the time, but in reality it used up a lot of floor space and everything behind the monitor was dead space. 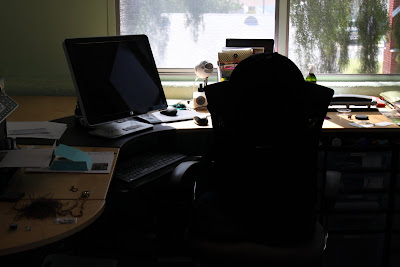 And the summer sun was blinding starting around 4:00 p.m. which is a little too early to call it a day most of the time around here. The printer also lived in this space to the left of the monitor so I could reach it. Turns out it doesn't like the heavier stock of card printing, so it jams unless I feed it one at a time.

I refuse to have my nice new sleek Imac with a big old clunky printer. So....the circular board has come out and a new 24 inch straight has been installed in it's place. The file cabinet has been moved to under where all the plastic drawers were, but now I need drawers. The second file cabinet will get drawers today, the plastic will be emptied, the old files will be shredded, and a new platform under the desk will hold the printer. I still need leg room however, so a small curved lip will be added the front, and installed a few inches lower to hold the trackpad, keyboard and a piece of paper or two.

I look forward to a really comfortable, ergonomic, refreshing, light filled space where I will begin to learn my new hardware and software and eventually begin to write two new books!
Posted by Marcia DeCoster at 9:01 AM

I am totally with you in the studio renovation spirit, Marcia! There's something wonderful about making everything just right, functional, and visually pleasing.

I just had a look and you are totally with me...well actually you've outdone me with some stellar installations, me it's all IKEA, but it does have a nice clean look. I'll be in SC in July, I'm hoping I can perhaps visit your abode.