I'm working on the material I will cover in my second Interweave video.  The first on Right Angle Weave also covered the fundamentals of Cubic Right  Angle Weave.  You can purchase the dvd or a digital download which is very competitively priced.

This one will cover a really broad range of Cubic Right Angle weave techniques, including shapes with  turning corners, shapes with curves, embellishments and a foray into prismatic right angle weave, which is basically the same thread path but with a different number of beads then the four which make up a cube.

So what do step outs entail?  Think of it like the cooking show where all the prep work is done on camera and then the completed recipe is taken out of the oven…..only more work!

For each technique shown, I need to make three to four samples that show different bits of the process including the finished one.  For example, I will show how to start the first cube for a square, then pick up the prepped piece where I turn the first corner, then pick up the piece where I have turned the 4th corner so that I can show the join.  All this so you don't have to sit and watch me build the 15 cubes it would take for me to show you the entire process.  And that is just one square.

I am not in anyway shape or form complaining. I actually love the process of thinking through how to effectively share the most important on camera steps to lead one along in learning the skills. 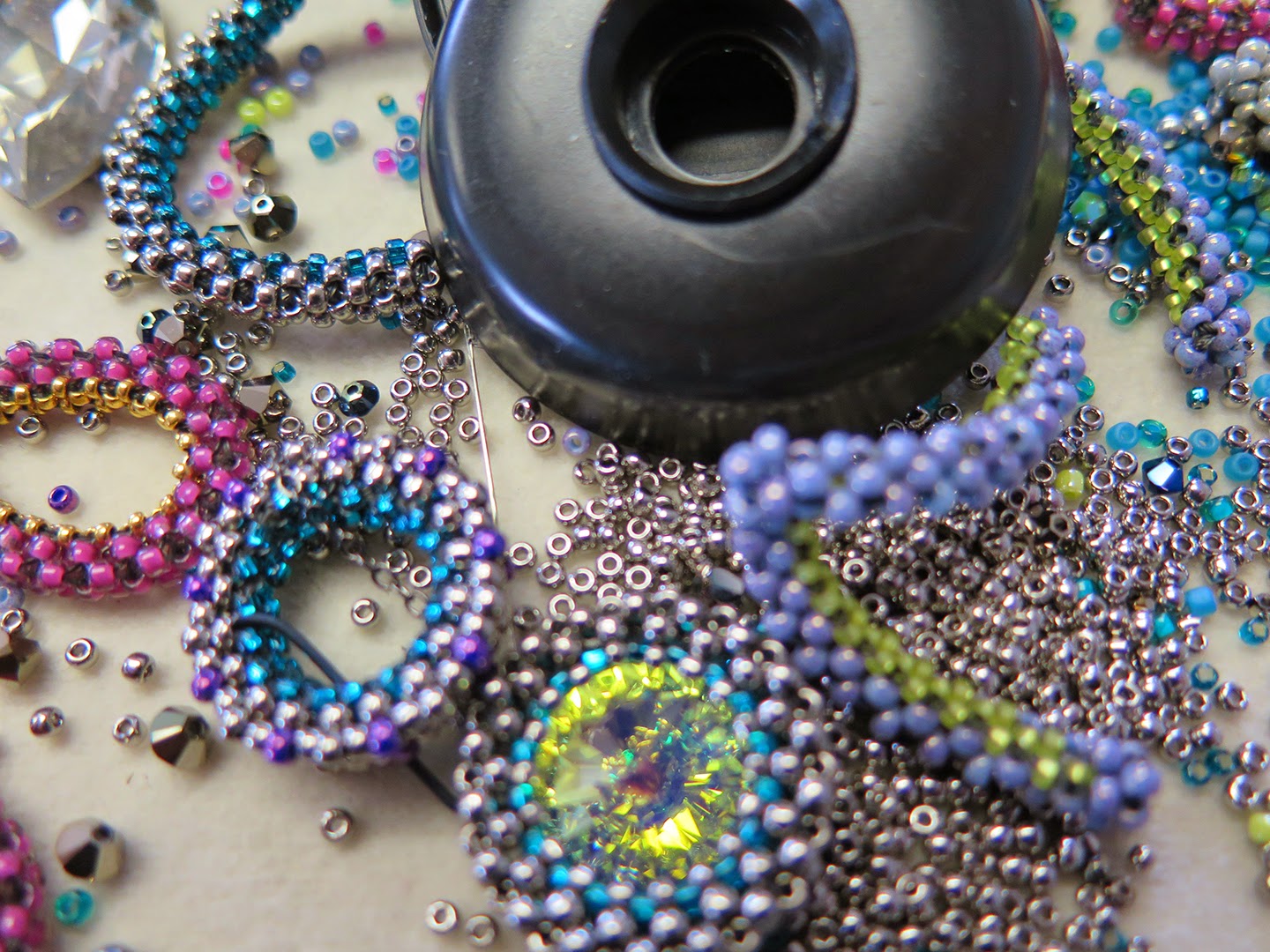 I have an outline, well four as the information will be presented in different videos and chapters within the videos and steps within the chapters.  So each set of step outs gets a bobbin and a step number, and then it goes in a small bag with other step outs from that chapter and then the chapters go into a big bag for the that video.

On an unrelated note, isn't this a pretty site, ancient bells that were mostly packaged up yesterday.  Psst….there are four aqua gold ones left…. 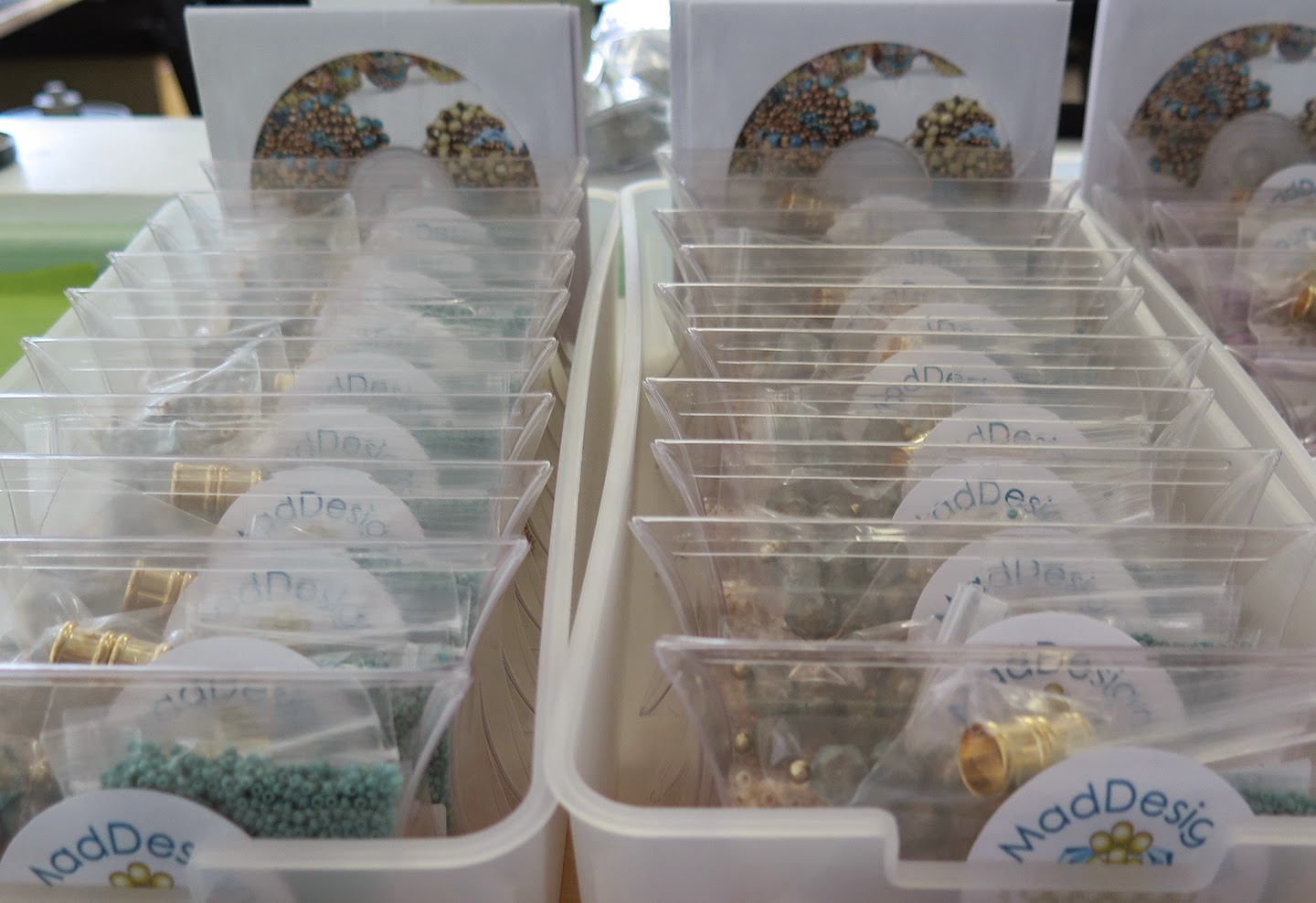 It is a rather graceful design.  I have an idea for some different tips and may re-release this with the variation as time allows, but for now there are these four and no more. 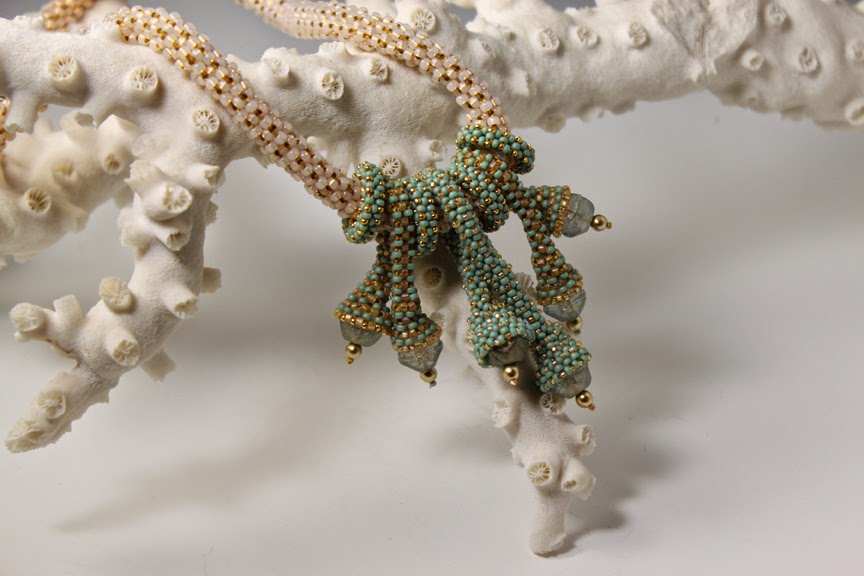 Two more days of step outs and then I turn my attention to some last minute details for Beading by the Bay, on to Tucson and then off to Colorado to film the video.  It will likely be ready sometime in April, so if you've been wanting to learn or expand on your CRAW knowledge this might be just the right video for you.
Posted by Marcia DeCoster at 9:39 AM