Well maybe it's not all that brave, but during our outing to Palm Springs, Mark suggested a ride on the aerial tramway. Uh....ok, after all it is only fair to compromise.

He neglected to mention the fact that the platform of the tram rotated 360 degrees multiple times during the ascent up a very steep mountain. He knew it too, just thought not mentioning it would work in his favor to get me to join him.

Well I've forgiven him, the views up top were beautiful. There was snow and the air was mountain fresh and crystal clear. 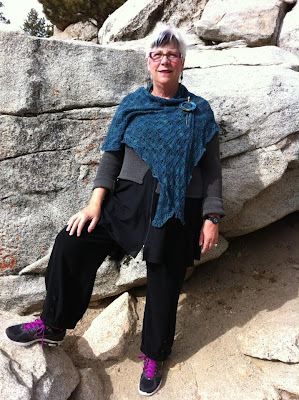 And for the curious (Lisa W) the shawl is Bitterroot. There are beads added with a crochet hook during the last few rows. I did mine out of a Schaefer Heather worsted weight. It doesn't hold the points as much as I would like, but it is warm and cozy and works well when you need a little more then a light weight lace.
Posted by Marcia DeCoster at 11:58 AM

Scary trip on the tramway Marcia! I think the shawl is lovely and you wear it so well. I think I may have to take a break from knitting socks and do a shawl.

What a lovely shawl! I admire your knitting skills, and the many gorgeous things you seem so effortlessly able to crank out! I'm just finishing my guys sweater, and now praying it fits him well. An aside: I"ve been cozy and stylish ( very important!) in the house wearing the socks you made for me. Thanks again.

Marcia I have long been an admirer of your beadwork and your book, Beaded Opulence, was the inspiration for me to finally learn RAW...and I love it! But lately you have even inspired me to want to learn how to knit! I just love all of your knitting, especially the lacework! It's beautiful...and now I can just see myself building a huge stash of yarn! Thank you for the inspiration!