A ticket to Tokyo?

The bathroom shower was out of soap so I opened this pretty package which had been gifted to me. I'm partial to Trader Joe's Verbena soap but since I haven't organized myself to purchase one, I had to make do.

The packaging was so pretty I really hated to open it and it is a little over perfumed for my taste. As I unwrapped the beautifully creamy bar of soap this ticket fell out. Without glasses I had no idea what it said but it did appear to be a used rail ticket. London to Tokyo Milk station. I thought perhaps I had opened the millionth bar of soap and was being rewarded with the golden travel ticket. I think however it is just a bit of marketing, a fun one and one that invoked at least a few minutes fantasy. Sigh, I guess I'm not going to London. 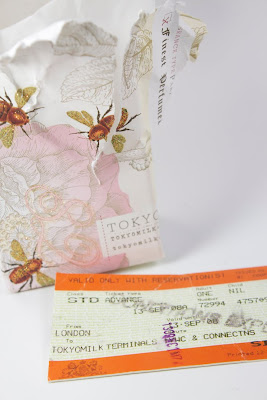 In my corporate life I traveled to London at least twice a year and sometimes more and I miss it. And then I didn't even know Jean Power and I totally want to go to London and meet Jean. 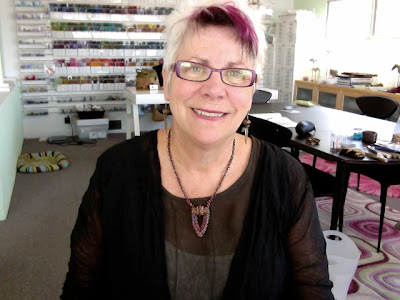 Off to Santa Cruz in the very early morning, where I'll celebrate a 60th birthday (not mine, a friends), visit with Ms. Rachel, have dinner with Beading by the Bay partner Susan and spend some time with Ms Malayna Pies. I'll meet you back here on Wednesday!
Posted by Marcia DeCoster at 8:13 AM

Your very own necklace looks fabulous on you. Happy Birthday to you and enjoy your travels.

It's always an interesting experience to see a photograph of a piece and then see someone wearing it...Your "Very Own Necklace" is beautiful! And I can see the infamous "mighty bead wall" that Kate McKinnon talked about! I want one of my own!!

Thanks Danielle, it's not quite my birthday that would be October. Thanks Lauren, I highly recommend a wall of seed beads.

What a fantastic thing to find in your SOAP. It sparks me for our love letters book. Train tickets and movie tickets should totally fall out of them.

I'll be thinking of you fondly on your birthday. Have a wonderful time.

Oh my gosh, I would have had a heart attack! The necklace looks awesome on you!

That ticket would made a wonderful addition to a mixed media piece!