I was having a look through some of my early photos and came across this collage of projects. The time frame was probably around 2000, maybe 1999. I was still working full time and teaching the occasional class with my then bead partner Linda. It was pre web-site and we used to send portfolios to bead stores to be considered. My guess this is one that I sent. 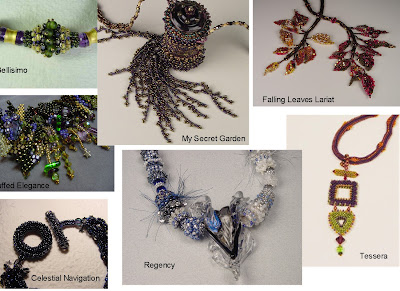 I notice my wildly different skill level with the camera. It was all trial and error at the time, I didn't understand white balance, as evidenced by the photo of Bellisimo in the upper left. Bellisimo was beaded on a sailing cruise down the coast of Italy and was my first published piece in the Art and Elegance of Beadweaving by Carol Wilcox Wells.

Tessera bottom right got re-invented and showed up as the cover on Step by Step beads some years later. The color palette was a bit more shall we say refined then the earlier versions. 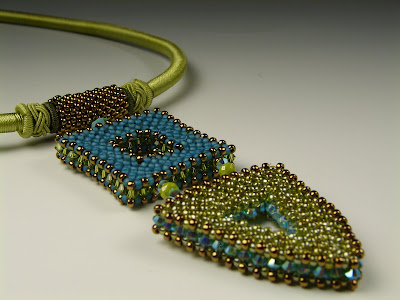 It was the article that caused Lark to approach me about doing a book, so it was fortuitous in that sense.

The Secret Garden front and center has always been a favorite. The top opens to reveal a garden suspended from the top.

Regency was a re-invention of Bellisimo with the addition of fiber in the beads and the beautiful glass heart.

Cuffed Elegance and Falling Leaves were both freeform pieces. I still like freeform although it seems to have waned in it's popularity.

It was a fun look at the past and a reminder of how my work has evolved.
Posted by Marcia DeCoster at 7:46 AM

Wonderful to see your evolution Marcia, I love Regency, i have a soft spot for fibre, (no pun intended)

These are the types of photos that I like to look at when I begin to feel that designer's cramp. It's nice to see where you've come from and to know that you're definitely moving forward.

It is always interesting to look back at previous work and see how you have evolved as a designer and artist. My first photos at the time I thought were great and now I look at them and cringe to think I published them on my website. I look at some of my earlier pieces of work and see the notable change in technique, design and quality. Your work is just beautiful, keep growing and evolving :)