Yesterday we did the self guided driving tour of many of the mid century houses Palm Springs has to offer. I discovered a neighborhood where I actually thought it would be possible to l live. Not that I am considering moving mind you, but I was really attracted to the design aesthetic of the low roofs, the clean lines, the small footprint and the backdrop of the dramatic mountains.

Once I upload the photos, I'll share some. We followed that by a meal at Cheeky's, not sure why it is called that, but it had a really eclectic menu and the food was both beautifully prepared and presented. Breakfast was served all day and I passed up the rice porridge with shredded duck and crisp wonton in favor of chantelle mushrooms on toast points with gruyere cheese and two eggs.

We stopped in a neighboring shop where I came across a selection of Tokyo milk which happens to be my all time favorite hand cream, lightly scented shea butter. If I see it I pick it up. Their soap is also lovely. 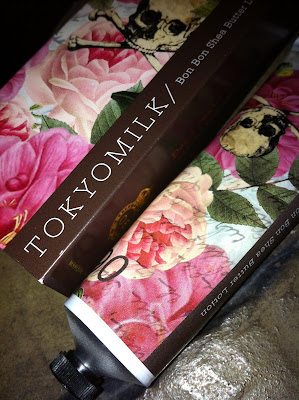 I've decided to take a break from the project that isn't sorting itself out to my satisfaction and work on a different one for today. Beading is on this morning's agenda followed by a trip to the Grove.
Posted by Marcia DeCoster at 7:18 AM

Breakfast sounds just delicious....glad you and Mark are having a great time!

i just think that when a project doesn´t convince you at all its time to leave it and do somnething else. My motto for beading is just make stuff you really adore. Otherwise, its so nice you have this lovely free time! it will help you focus when you need to. regards Marcia!