My second Ancient Bells in Lavender and Bronze…..A fun way of using CRAW and PRAW.  What is PRAW?

The two side bells are beaded with cubic right angle weave and the center is prismatic weave with five sides.  The necklace is also prismatic weave using size 8 beads and six sides around. 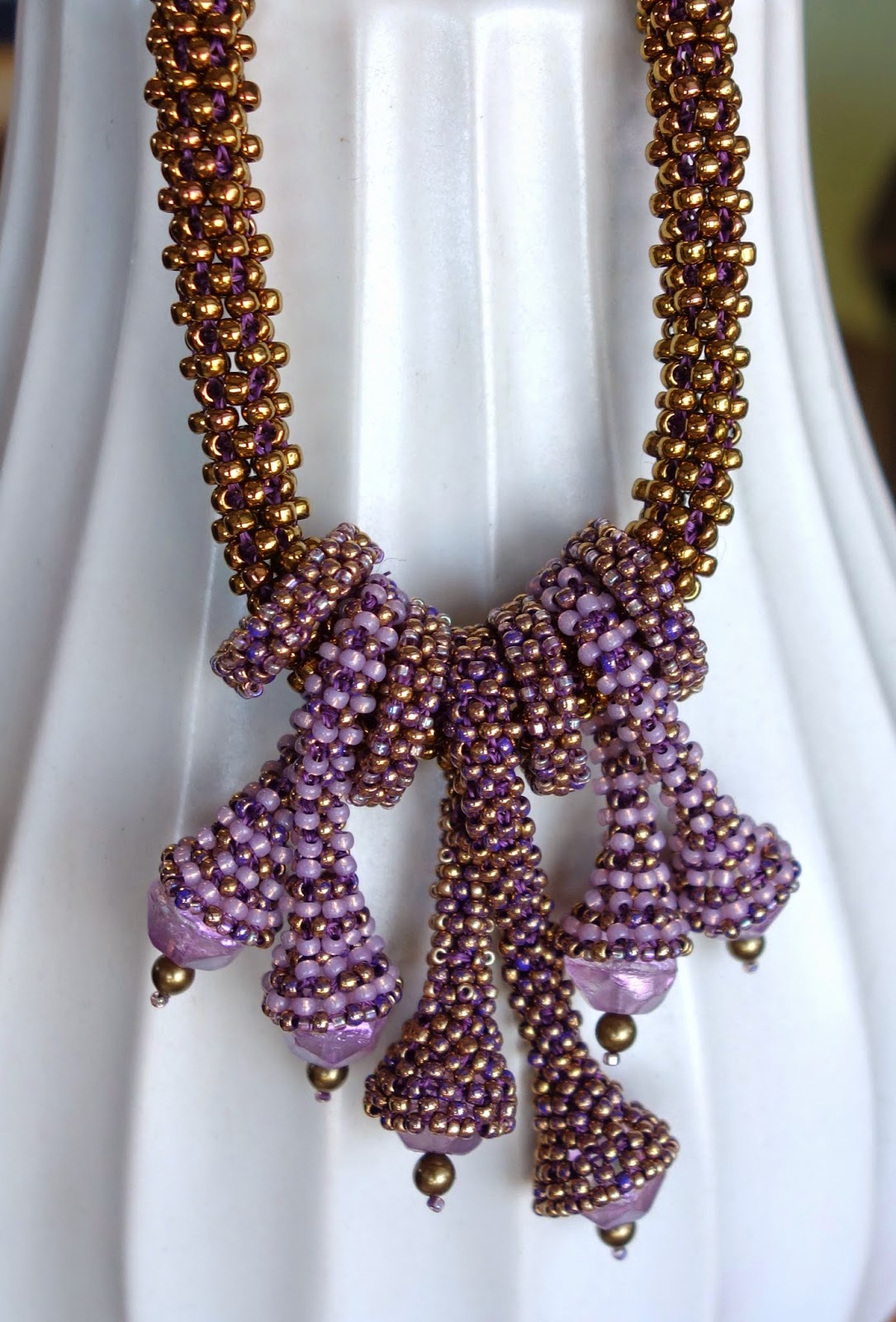 So what is prismatic weave, it's a term for a stitch which shares the thread path of cubic right angle weave (cross the intersections with thread which squares up the sides) but is done with more or less sides then the four sides which make a cube.  Since according to smarter girls then I, Cindy Holsclaw and Gwen Fisher, that what is being woven is a prism, then the terminology fits and a PRAW-X where X is the number of floor beads (or sides) that are being created.

In the example of my necklace, it would be PRAW-6.  Although it adds another term and may initially cause some confusion, I just couldn't bring myself to call it CRAW when it wasn't a cube I was creating.  This way of referring to it makes sense to me.  We could of course use TRAW for triangle or three sided, CRAW for cubic or four sided, but after that my memory fails me for naming the 5, 6 or 7 sided ropes….so for me PRAW works.

Since CRAW and PRAW stitch present a lot of visible thread I decided to use the thread color to my advantage, using a dark purple thread with the bronze beads.  It adds a nice dimension to the finished piece.  In most cases I use double thread and forego the extra pass around the top or ceiling beads of the prism, however in the case of the necklace I found that extra pass pulled in the top nicely and the side beads create a ridge.  Here I wanted the one color but I think this would be especially fun with floor and ceiling beads of one color and a high contrast for the side beads.  The ridge created would be so much more visible in that scenarios and someday soon I will be trying that!

In the meantime I am working the second color way for Layla, my beading by the bay piece, and just this morning I woke up with a vision for a Bead Dreams piece that I'd love to complete.  Colors have been decided, stash beads have been assemble, additional beads have been ordered…..and I want to bead it now.  But Layla needs it's turn to be finished first!  I have a week of mostly at home time, with just a few holiday related outings required.  The rest of the time I'll be beading!
Posted by Marcia DeCoster at 8:45 AM

I realize that your "semi" retirement has only just begun but I'm thrilled with how much you seem to be enjoying yourself! I'm also thrilled (as I've commented before) with "Ancient Bells and know it will be on my agenda soon :)
HAPPY HOLIDAYS!