Ten years ago I embarked on creating a bead calendar with then bead partner Linda and Dona Anderson of Beading Hearts. Sadly Dona passed away in March of 2009.

Recently I gave a talk for the Portland Bead Society and noted the calendar as part of my bead history. I thought it would be interesting to have a look at the calendars participating artists and see with the help of google what they might be up to now.

January was Dona's Anderson's Tom Cruise purse which she gifted to Rosie O'Donnell. 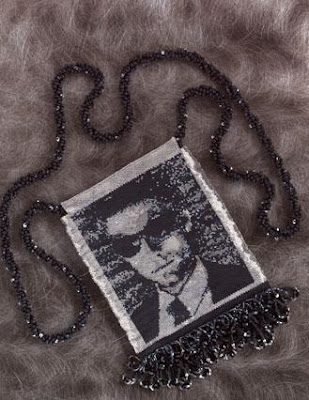 February was a vessel by Carol Wilcox Wells, my first ever bead teacher. Carol still teaches at Beads on the Vine annually, was the 2011 Designer of the Year in Beadwork magazine, wrote what many of us consider to be the go to Bead Weaving book, "Creative Beadweaving', followed by 'The Art and Elegance of Beadweaving' and most recently curated Lark's Masters Beadweaving book. 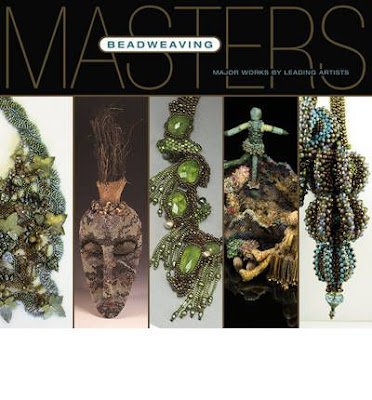 The far right piece is Urchin Lariat made by me!

March was Poppies and Thistles by Margo Field. A quick look at Margo's website and it is clear she is still a very active Bead Artist and has continued to create beautiful floral pieces. 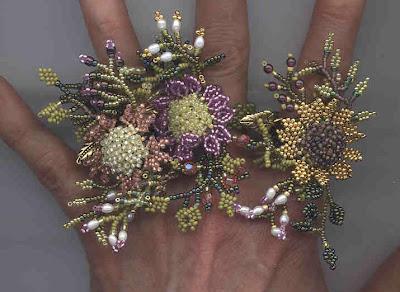 These rings have always been a favorite of mine.

April was School of Fishes a loom worked piece by Don Pierce. 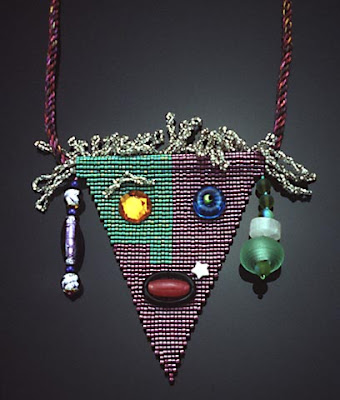 This is not school of fishes but another loomworked piece by Don Pierce. Don wrote two book about Beading on a Loom. His website lists workshops in 2008, so his current status is not clear to me.

May was Paula Walter. Paula won first place in one of the early Bead Dreams competitions. Her main body of work was bead embroidery and over the years we ran into one another at events like BABE in Oakland California. I wasn't able to find any current information.

June was Cynthia Rutledge with a piece called Vessel IV.

This is not the vessel in the calendar but a similar concept from her site. Cynthia continues to be an incredible bead artist, with bookings all over the world, joined by husband Mark in a successful bead business. Cynthia was also part of Beadwork Magazine's designer of the year series and one of Bead and Buttons Top Ten teachers. 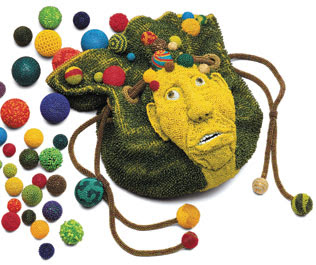 David continued to bead and in February of 2005 was the artist featured in the show at the Bellevue art museum called 2 Hands, 20 Years, and a Billion Beads. Shortly after David moved to North Carolina to the prestigious Penland School of Crafts as an Artist in Residence, where he is studying glass.

August was Lisa Niven Kelly with her sculptural women Gaia. 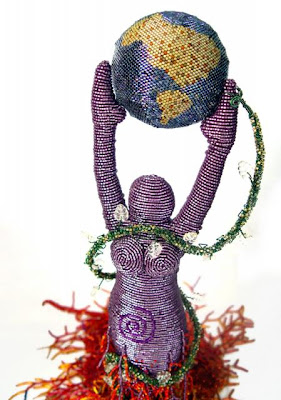 Lisa, an accomplished seed bead artist, also became an accomplished lampwork artist. Then motherhood came and with two young daughters Lisa chose to stay closer to home, founding the very successful,Beaducation, with online classes, tools and supplies. With all this she continued to teach and was named one of Bead and Buttons Top Ten teachers in 2010.

Diane has contributed a huge selection of beading books to the beading community including Shaped Beadwork, the first in the Beadweaving Master Class Series by Lark. Diane was also named a top ten teacher by Bead and Button in 2010. 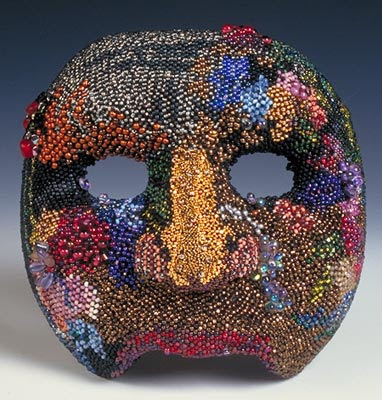 NanC created a beautiful store in Illinois, since closed, created the Master Class concept which she taught internationally and has supported many bead artists through her teachings. She also conducts smaller workshops titled 'Art Sticks: I'm Not an Artist, I Can't Draw,I Can Only Draw Stick Figures' I had the good fortune for NanC to teach her workshop at my home studio in October of 2010.

November was Delinda Vannebrightyn Amura. Delinda was a bright star in the beading world, creating many wonderful pieces and teaching. Sadly I find no current information for Delinda.

December was 'Santa Claus' by Ann Paxton who was a San Diego judge turned bead artist who did graphed amulet purses and completed them with stunning fringe. 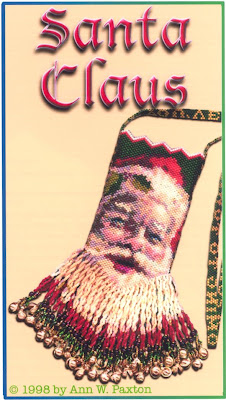 I did not find a current site for Ann, but did find a link selling her patterns here and here.

This was an 18 month calendar so we go on, but I will leave the rest for another post.
Posted by Marcia DeCoster at 12:36 PM

Great post Marcia. I really miss Dona Anderson. She was a great friend and bead mentor. This calendar is a favorite of mine filled with so much inspiration.

I made that Santa bag and still have the pattern and left over beads. It is stunning.

I think it's time for a new calendar!

you listed my favorites. I miss B. Grainger. You are the best! pattyjean

I still have the calender to this day and I agree it is time for another one!

Wonderful post....and I second the motion for another calendar!!

Marcia, thank you for this post. I did not know that Dona Anderson had passed away. I am sad to hear that. I took a few classes with her, they were great.